Sadie’s Story – The Path of a Pet

Sadie’s Story – The Path of a Pet

“No one appreciates the very special genius of your conversation as the dog does.”

I find if fascinating how animals find their way into our lives.

My super-model Shepherd-cross, Sable, was given to me and John as a belated wedding present of all things. She arrived in our lives as a 7-week old barfing little ball of black and tan fur that proceeded to chew everything in sight, including my pant leg – while I was in said pants, trying to walk.

Soda, also a Shepherd-cross but with a figure more like that of a sturdy farm girl than a slender super-model, found her way to me as a 1-year old dog in dire need of a home. As a puppy, Soda had been found abandoned by the side of a country road and then spent the first of year of her life on a farm – fed and watered but not particularly wanted or loved.

My friends and family tease me and say that if a dog is lucky enough to end up in my life, they have won the lottery…it doesn’t get much better 🙂

After Soda passed away in 2014, her vet said to me, “Nature abhors a vacuum, Maryanne. You won’t be without a pet long, unless you want to be.”

Sure enough, Sadie, a 5-year-old Retriever found her way to me 9 months later.

Sadie belonged to friends of mine and although they loved and cared for her, she just wasn’t the best fit. And I totally get that. A pet has to be a right fit with the owners and their circumstances. A dog like Sadie needs a lot of attention. She is a retriever through and through; she lives to retrieve the ball. Which means someone has to be throwing said ball…over and over again.

Sadie’s story is interesting. Her original name was “Miricle.” I don’t know why the word ‘miracle’ was misspelled but it makes sense why she got the name. Legend has it that after she and her sibling puppies were born, the Momma stepped on and killed every single puppy – except her. It was a miracle she survived.

Her first owner kept her for two or three years and then ran out of time, energy and money to care for her, so she ended up being taken by my friends – and they renamed her Sadie.

Two years later, Sadie found her way to me. And what a miracle she’s been in my life. We go to the beach every day where she loves to swim. We go on lots of walks and hikes and just hang out. Whenever I leave her at home on her own for awhile, the greeting I get upon my return is over-the-top welcoming. She races up, tail wagging and makes these weird little gurgling sounds. It’s hilarious!

And I love waking up in the morning and hearing her snoring softly on the floor. Or if she’s up first, I will open my eyes to see her sitting beside my bed, ball in mouth, patiently waiting. 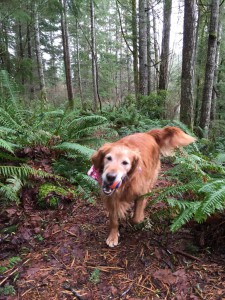 In terms of her ball-obsession, we have a pretty good system worked out so that she gets her ball-fix and I still get some work done. I’ve even come to admire the seriousness with which she approaches ball-throwing.

When I’m working in the garden, she is very strategic about where she drops the ball. She puts a lot of thought into making sure the ball is placed in a location where I will see it as soon as possible…a nearby flower pot, the grass, a chair or the swing. And if I don’t see it quite fast enough, she will nod towards it then look back at me.

Her patient, methodical, relentlessness is rather impressive – perhaps because those are the exact same qualities I have to have as a writer.

And on that note, Sadie knows not to bother me when I am writing. But on occasion, when I am still working on my laptop long after the timer has gone off, she will bring her ball over to my laptop and drop it on the keyboard. This drives me bonkers – but nine times out of ten, she’s right: it is time for me to take a break.

Although she is 6 now, she loves to make her toys squeak – the louder, the better. Her favourite squeak toy is her stuffed squirrel; the burger a close second. I will often hear her squeaking away to her heart’s content in another room. Thankfully, however, the squeak-sessions don’t last long.

As for the morning yoga sessions in my living room, let’s just say that Sadie has added a whole new dimension to my yoga practice. Sometimes when I am doing a downward dog on my yoga mat, Sadie will come up beside me and do her rendition of a downward dog (which is far more authentic than mine, obviously), as if to say, “Actually…this is how it’s done.”

As for the ball-placement during yoga? Well, just like in the garden, the ball gets placed as strategically as possible – for Sadie’s benefit. Sometimes she manages to roll the ball so that it stops beneath my bottom when I’m not looking. But when I go to sit back down, it certainly gets my attention. Or she will drop the ball on my chest when I am doing a reclined spinal twist…that gets my attention, too. She’s even dropped it on my back when I was doing a plank pose!

Anyway, I won’t natter on any longer. There’s nothing worse than a person going on and on about their damn pet 🙂

But I would love to hear (honestly!) how your pet found its way into your life and/or any funny quirks they might have.