Trash Island: The World’s Largest Landfill, Minus the Land 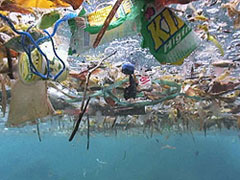 “60% of the plastic found in the oceans is comprised of “one life plastic” – plastic bags, Styrofoam food containers and plastic drink bottles which can have a life expectancy of over 500 years.”

Lurking in the North Pacific Ocean is something more menacing than any great white shark or colossal squid. Although it’s unclear exactly how large it is, this beast is far bigger than either of these sea creatures and much more deadly.

The Great Pacific Garbage Patch, a massive and sad monument to human waste, stretches for hundreds of kilometers in waters north of the Hawaiian Islands. 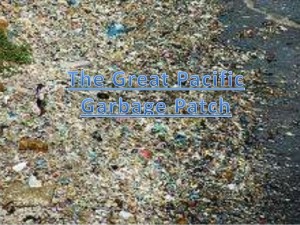 Scientists are not sure of its exact size, but estimates range from the size of Texas to larger than the continental U.S. Given its location in the North Pacific Subtropical Gyre, which is made of slow-moving and spiraling ocean currents, and the fact it’s not a solid mass, the Great Pacific Garbage Patch is difficult to measure. It’s also not detectable from satellite imagery.

It’s been referred to as “Garbage Island” or “Trash Island” but these nametags are misleading. The Great Pacific Garbage Patch is more like a chain of islands, with some parts that are more visible than others because portions of the litter patch are slightly submerged and others are too small to see.

Sadly, the amount of plastic trash in the Great Pacific Garbage Patch has increased 100-fold during the past 40 years, causing profound changes to the marine environment (NBC World News, 2012).

The simple answer is filth and debris, the main ingredient of which is plastic. Plastic bags, bottles, and other consumer products migrate to the Patch but don’t biodegrade. Instead, sunlight gradually breaks the plastics down into smaller pieces – known as plastic particulate – until they are microscopic in size.

The Patch isn’t all plastic though. Fishing nets, steel shipping containers (and their various contents), metals, glass, and rubber all contribute to the problem. Most of these materials sink however, leaving plastic pollution to hover above.

The threat to marine life

This litter Leviathan presents several dangers to sea life. Discarded fishing nets entangle seals, sea turtles, dolphins and other animals, causing many to drown. In addition, some marine animals will confuse plastic bags with jellyfish and swallow them. This can result in suffocation or starvation. Meanwhile, smaller debris can prove fatal to sea birds that often mistake trash for food. After they scoop it out of the water, many birds feed inedible plastics to their chicks, leading them to die of starvation.

Another major hazard is created when sunlight hits the plastic pollutants. This poses two significant problems. First, the sunlight releases chemicals and toxins from the plastics, which then leach into the water. Second, the light causes photodegradation, which breaks down bigger plastic materials into plastic particulate. Unleashed in the food chain, this plastic particulate can have devastating results when consumed by marine organisms.

What you can do

Given the sheer scope of the Great Pacific Garbage Patch and the funds required for such a major cleanup operation, hopping in boats and fishing out the debris is not a simple solution. And the discovery of a similar garbage patch in the North Atlantic Ocean means several major cleanup operations would be needed to help address the problem.

A more practical approach – at least to start – is to reduce the amount of trash we’re contributing at the source. This means reducing and recycling the plastics in our lives.

Here are 7 simple ways you can help:

2. Assess whether you need to use plastic bags as garbage liners – if you don’t need to use them, then don’t.

3. If you do prefer to use plastic bags for garbage, then perhaps re-use other plastic bags instead of purchasing new ones just for the garbage. Large dog food bags as well as soil and compost bags work well.

4. Recycle plastic bags and water bottles versus throwing them in the garbage, where they will end up in the landfill…or the oceans.

5. Talk to others about plastic bag and bottled water use (or send them Face the Future blogs!) and encourage them to cut down.

6. Consult companies and municipalities about the amount of plastics they use and their recycling programs.

7. Try to purchase fewer products that come in plastic packaging…the best way to reduce plastic waste is to use/purchase less of it in the first place.

If we each take these small steps, perhaps we can at least start to slay the litter Leviathan of the deep blue sea. With World Oceans Day coming up on June 8th, now is a great time to bring awareness to the many significant issues threatening the health of our oceans.

Other Face the Future blogs