Cell Phone Etiquette – As Taught by the Sharp Elbow Jab 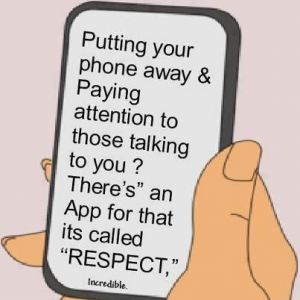 Okay, I may have been a tad sensitive when the, er, cellphone incident took place a few weeks ago. But in retrospect, it was certainly a mothering moment – in which I acted in a very Mother-like way – so I thought this little story would be suitable to share in a Mothering Matters blog 🙂

I had been asked by the Threads of Life organization – a Canadian charity that provides support to families of workplace tragedies – to attend a press conference at the British Columbia Parliament Buildings in Victoria. The purpose of the press conference was to announce a working partnership between Work Safe BC and Threads of Life, as well as raise awareness about the importance of workplace safety.

So I attended the press conference, along with several other family members who have been impacted by a workplace fatality, serious injury or occupational illness. The media event took place in a secure section of the building – so unless a person had been specifically invited (or was authorized to be there), they wouldn’t be in attendance. So basically, in the room were: people from Threads of Life, some family members, the media and several government representatives.

Now, also happening near Victoria on that same day – at the exact same time, in fact – was the police funeral for RCMP officer Const. Sarah Beckett, 32, who had been killed in a car crash. Sarah left behind a husband and two young children.

The seat beside me was vacant until the last moment. Then, just before the press conference began, a good-looking guy in his twenties, dressed in a suit and wearing an ID tag, sat down and promptly began to scroll through the e-mail on his phone. Hmmm…

The press conference started and the first person to speak was a senior provincial government representative. She started off by commenting about the importance of the work that Threads of Life is doing in the community – both in terms of raising awareness about the need for a reduction in workplace fatalities, injuries and illnesses, as well as their commitment to supporting individuals and families who are coming to terms with a workplace tragedy.

But the guy beside me just kept on scrolling through his e-mail. Strike one, buddy: I’m a family member of a loved one who died as the result of an easily preventable fall at an unsafe workplace.

The speaker, clearly emotionally impacted, then went on to say a few words about how her thoughts were with the family and friends of Const. Beckett – and how the public appreciates the ultimate sacrifice the officer made.

The guy beside me just kept on scrolling, eyes glued to his phone. Strike two: I’m the widow of a police officer who died in the line of duty.

We didn’t get to strike three. The next thing I knew, I wound up my arm and jabbed my elbow sharply into his arm – the one holding the phone.

He turned and looked at me, livid.

“THAT IS RUDE!” I hissed back.

He gave me the stink eye – and then immediately put his phone away.

Well, you could have cut the air between us with a knife for the rest of that press conference 🙁

And as soon as the conference ended – it lasted a whopping 15 minutes – he got up and left the room.

So I sauntered to the back of the room and had a little chat with the nice gal who had given me some water prior to the press conference.

“Well,” I said to her, “this is a little embarrassing but I think you should know what just happened.”

I told her about the elbow jab and pointed to the chair the guy had been sitting in. Her eyes grew wide as saucers.

“Oh, I am SO sorry!” she said. “That should NEVER have happened…he knows better. That is completely unacceptable.”

“Oh, that’s okay,” I said, giving her a little wave of my hand. “That seems to be the norm these days…people glued to their cell phones…”

“There’s a time and a place,” she said, shaking her head. “I’m going to have tell his supervisor.”

By that point, I had returned to my usual self – not wanting to rock the boat…don’t want to get anyone in trouble.

She looked me in the eye. “Yeah, I do. But don’t worry, I will do so appropriately.”

So that was that. If he didn’t get the message when I jabbed him with my elbow, he was going to get it from his supervisor.

And what, exactly, WAS the message? That there is a time a place for scrolling through one’s cell phone – and if you are supposed to be paying attention to what is actually happening around you in real life, then pay attention…if not for yourself, then out of respect for others.

Then, on the drive home, I was listening to the radio and heard a clip from the eulogy given at Const. Sarah Beckett’s funeral. One of Sarah’s old supervisor’s delivered the heart-breakingly beautiful eulogy and he was talking about how Sarah didn’t take guff from anybody. If something needed to be said, she said it. She wasn’t afraid to speak up.

I looked to the sky and smiled.