The Power of a Play 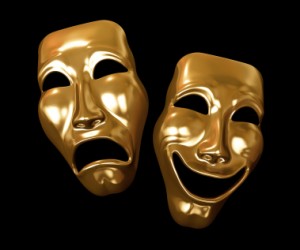 The Power of a Play – How Theatre Can Move Us…Literally

Our circumstances change and so do we.

The trick, I’m finding, is to pay attention…for often it isn’t until we truly accept that one door has closed, that we can notice another has opened.

Years ago, I gave a presentation entitled Wake Up to Your Dreams to a group of writers at the Alexandra Writers Centre about my experience of writing my book, A Widow’s Awakening. After I had finished speaking, a man asked me to explain in more detail about the awakening process. “Because so many people,” he said, “seem to be sound asleep.”

I paused a moment before answering, thinking how best to articulate my perspective on the concept of awakening.

“The day after my husband died,” I finally said, “I remember noticing how slowly my parents seemed to be speaking to me. In fact, right from the moment I was told of my husband’s fall, it felt like I was functioning on a different level than everyone else…almost as if the shock of his imminent death had launched me into a heightened state of awareness.”

The man who’d posed the question nodded, so I continued. “I remember being really irritated with people in those first few days. It was as if my soul inherently understood the significance of my husband’s death – but everyone else around me just seemed stunned. I felt like screaming, ‘Pay to attention to this!’ And it became clear to me very quickly that I had to write a book about the experience.”

“So do you think people need a tragedy, or something really significant to wake them up” he asked, “particularly in regards to the importance of pursuing their dreams?”

“No,” I said. “I think there are plenty of people living their dreams simply because they chose to do so and then took the necessary steps to achieve their goals – rather than being forced to do so after experiencing some sort of tremendous loss, tragedy or life-altering event.”

The man shook his head. “I don’t agree. I think most people need a pretty loud wake-up call. It seems to me that the vast majority of people are so asleep that they aren’t paying attention to what’s going on around them…or in them.”

In hindsight, I can hear the angels laughing.

For the very next day I got another powerful wake-up call that hurt like the dickens…but it wasn’t in the form of a tragedy. At least, not a real one.

It was a play.

I’m really starting to suspect the universe communicates to us through channels that will have the best chance of catching our attention. As a playwright and lover of the theatre, it makes sense that it would be a play that instigated a major life decision.

Maybe it’s like listening to the radio…we tend to listen to certain stations, so although we may flip between two or three different ones, the universe likely won’t send us an important news bulletin on a station we never listen to!

At any rate, the play was called I, Claudia, by Kristen Thomson at Alberta Theatre Projects. and it was about a twelve year old girl hiding out in the boiler room of her junior high. It was a one-act, one-woman play where the actress played four different characters: twelve year old Claudia whose parents were recently divorced, the school janitor, Claudia’s grandpa and Leslie – Claudia’s dad’s new wife.

The actress playing the four characters put on different masks and outfits and changed her voice and behaviour to convey which character she was, at any given moment. And isn’t THAT a metaphor for how we often live our lives?!

Anyway, about two thirds of the way through the play, twelve year old Claudia was so distraught that she was screaming at us – the audience – about her horrible experience over the weekend of having to go to her dad’s wedding. She had a ruler in her hand and was waving it at us, as she got angrier and angrier explaining the humiliation of having to wear this God-awful dress with a huge bow on her bum.

I howled with laughter at this image. But something didn’t feel quite right. I mean, although I was laughing out loud, it felt as if a whole bunch of emotion was…stuck behind my eyes, is the best way I can explain it.

Then Claudia went on to say, through tears, how FURIOUS she was at her dad for leaving their family and how lonely her mother would be now and how she wouldn’t get to see her dad very much anymore and how he obviously didn’t care about her feelings…

I wasn’t laughing anymore. I was bawling – and barely stopped for two days.

In my case, the axe was a play.

When the performance ended, you could have heard a pin drop. I wasn’t the only one impacted. I turned to my mom in the seat beside me. She took one look at the tears streaming down my face.

“Oh my God!” she cried. “What have I done? Look how hurt you still are over the divorce! What could I have done better? That damn father of yours!”

My parents divorced when I was six. My dad remarried a couple of years later. The catch was how he told me the news: he picked me up one day and casually announced, over his shoulder to me in the back seat, that he’d got married over the weekend.

Thanks for the invite.

“You cried for days,” my mom told me over dinner after the play. “You were so upset that my boss sent me home from work to take care of you.”

I didn’t remember that.

I do know that my dad didn’t intend to hurt me. He just made the best decision he could at the time. But looking back on the incident now, I think the best word to describe his behaviour is…indifference.

I guess I’d buried the pain resulting from that indifference until an annoyingly effective play brought it to the surface.

After dinner, I went home and cried some more. Although my dad lived with me at the time, he happened to be away that week – which was probably a good thing.

The next morning, I woke up feeling significantly better about that matter, having cried it out of my system. But then I proceeded to start crying again.

“Oh for God’s sakes,” I snapped at the fireplace, “now what’s the problem?”

And in my imagination, I heard a tiny voice whisper, “You can move on now.”

“IT’S TIME TO MOVE ON!” the voice in my head yelled back, tired of the gentle approach. “YOU ARE DONE HERE. YOU HAVE DEALT WITH ALL YOU NEEDED TO AND NOW YOU CAN LEAVE.”

I looked around my familiar living room with new eyes. Why am I still living in the same neighbourhood I grew up in? In the same house my husband and I bought? I am a 41 year old widow living with my father in a big city in the prairies. Is this what I signed up for?

For the short term, yes…but now that chapter was coming to a close.

My dad had moved in three years earlier and had been a tremendous help to me with my home, yard and dogs during a period when I had a lot of other demands on my time.

So, as I continued to cry my way through that Sunday morning, I realized that even though it had taken my dad thirty-five years to come back to me, in his own way he had…when I needed him most.

I guess dislodging all this childhood stuff must have made room for a long-buried dream to bubble to the surface because my next thought wasn’t about the past. It was about my future. And, for the first time since Saturday afternoon, I smiled.

I told her the details I’d worked out so far, including selling my home in the spring.

“Why don’t you just rent it out,” she suggested. “In case you change your mind.”

“Because I’m a widow and my husband’s not coming back,” I heard myself say. “I live in a house for a family and I’m obviously not having one. So why would I want to keep the door open to a life that was slammed shut nearly a decade ago?”

Three months later, my dad moved into his own digs, happy as a clam to be on his own again. Three months after that, I sold my home and moved to a cute bungalow by the sea.

All because of a play…sure glad I was paying attention.

Maryanne Pope is a playwright, screenwriter and the author of A Widow’s Awakening. She is currently writing two play scripts entitled Saviour and The Widows. Maryanne is the CEO of Pink Gazelle Productions Inc and the Board Chair of the John Petropoulos Memorial Fund. If you would like to receive Maryanne’s weekly blog, please sign up here.

8 thoughts on “The Power of a Play”