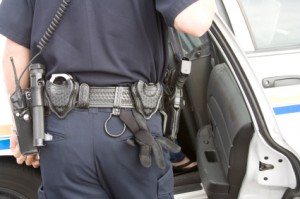 “Can I speak to you a sec, Maryanne?”

Darren nods. “Come with me.”

I glance at my watch and my stomach tightens. The press conference will begin in ten minutes. But Darren knows this, so I follow him out of the police headquarters media room and down a hallway into his office. Inside, he sits at his desk, opens a drawer and reaches inside. He rummages around, pulls something out and then turns to look at me.

“I’ve been waiting for the right time to give you this,” he says. “And I think today is it.”

Today is the Calgary press conference launching the John Petropoulos Memorial Fund’s safety initiative, Put Yourself in Our Boots. Darren is the K-9 officer who went into the warehouse with John the night he died in 2000. Darren had stayed on the ground level with his dog, Gino, while John went up to the mezzanine to investigate, which is where he stepped through the unmarked false ceiling and fell to his death.

Darren hands me a police-issue knife with a blade that springs open. I take it. My stomach tightens even more…partly because I suspect the significance of the knife and partly because the press conference will start in seven minutes – and I’m the spokesperson.

“That’s the knife I used to cut John’s uniform after I found him in the lunchroom,” Darren says. “I had to rip his shirt open so I could start CPR.”

I hold my breath.

“The weird thing,” he continues, “is that I dropped the knife in the snow a few years back and for the life of me, I couldn’t find it. But I kept going back to where I knew I’d lost it – and then one time, Gino found it.”

I manage a smile and for the first time today, relax a little. “I think so, too. Thank you.”

We walk back to the media room together. I go straight to the podium and the press conference begins immediately. My nervousness is gone.

Afterwards, a group of us drive to Edmonton for our press conference there the next day. And on the way, I get to thinking…

Darren gave me the knife that had assisted him in getting John’s breathing going again. Darren’s quick actions led to John being put on life support, which meant that a) I was able to spend the day with him as he passed away and; b) he was able to donate four of his organs.

One moment, the knife had been an inert tool on Darren’s belt. The next moment – when used – it significantly impacted dozens of lives.

In playing ball, and in life, a person occasionally gets the opportunity to do something great. When that time comes, only two things matter: 1) recognizing the opportunity and; 2) having the courage to take that swing.

Interestingly, both Darren and John had been trained by Brian Willis, a former police officer and now an international trainer of emergency responders – and a mentor to me. I’ve attended several of Brian’s seminars over the years and in one of them, he spoke of a dangerous state of mind known as “Code Black.”

Code Black, as police officers know but I didn’t, is when someone finds themselves in a threatening situation – and there is no previous experience, training or conditioning for the mind to recall that will direct the person on how best to respond. If Code Black occurs, look out.

But since police officers are trained to be mentally prepared to handle a traumatic incident, regardless of the specific circumstances, when Darren found John – unconscious and bleeding on the lunchroom floor – he knew exactly what to do…and did it.

Whereas when John’s Sergeant picked me up at work the morning of John’s fall and drove me to the hospital, I suddenly found myself in a completely unfamiliar and highly threatening situation – without a moment of training, conditioning or past experience to draw upon. One would think I should have gone into Code Black. But I didn’t.

Instead, I had the distinct sense that something I always knew was going to happen had just begun. And as much as I hated every moment of that horrific day, it had a definite feel of inevitability about it. So although I hadn’t been trained or mentally conditioned to handle something as shattering as holding my 32-year old husband’s hand as he died of brain injuries, I didn’t go into Code Black that day.

Here’s another reason why:

“People adapt to demanding circumstances. They have expected, natural and typically healthy stress responses to awful events. Stress reactions activate physical and mental defence systems. This stress response is closely associated with survival. It generates effective actions in the face of danger.”

Even though I wasn’t personally in physical danger the day John died, my heart, mind, soul and life as I’d known it up to that point was under direct attack. So in addition to having what, in retrospect, was actually a fairly healthy stress response to an extremely traumatic event, perhaps I also pulled a few of my own ‘knives’ from my tool belt that dreadful day: courage, strength and an intuitive understanding that despite the circumstances, someday I would be okay again. What I didn’t know, of course, was just how treacherous the long, slow road to recovery would be.

So when the hurt got worse instead of better in the days, weeks and months following John’s death, my mind decided to no longer accept a reality that had become too much to handle. Yes, I had survived my worst fear: losing the person I loved the most. But dealing with the realities associated with this was completely overwhelming. As a result, my mind didn’t just seek meaning in John’s death, it demanded it. And since something as mundane as a missing safety railing wasn’t a good enough reason to explain my lack of husband, my mind came up with better one.

In other words, I basically went into a form of Code Black – well past the actual traumatic incident. And the best way I can describe that experience is this: although I was surrounded by dozens of people who loved me, I have never been so lonely. I felt completely and utterly alone because I was too embarrassed to share what I was really thinking and feeling – for fear of being judged as crazy. 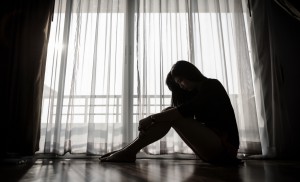 It was only when I finally began to open up to my best friend, Kristin, about my bizarre thoughts that I realized that everything I was experiencing was part of the grieving process: my grieving process. I also began to realize that I hadn’t just been in survival-mode the day John died. I had also been the closest to my true self…my soul, if you will. Yes, I was devastated, in shock and highly vulnerable – but that’s probably why I had such a strong intuitive awareness that what was going on was significant. My subsequent descent into Code Black revealed to me the why.

Perhaps it’s not a coincidence that Darren lost his knife at one point and despite his best efforts to find it, he didn’t have much success without the help of his police dog, Gino. Maybe that’s what happens to us, too? Maybe sometimes it takes a friend to help us realize that what we are searching for is often right where we left it, patiently waiting to be picked up again – and used.

For just as my best friend, Kristin, helped me find my out of Code Black and back to trusting myself again, so, too, did Darren give me his knife when I needed a reminder of my own strength and courage – and a validation that despite the hard work involved with the John Petropoulos Memorial Fund, it is the right path.

So perhaps the knife is a metaphor for the tools – the strengths, courage, intuitive understanding, skills, talents, passions and dreams – we already have within us. Maybe our job is to recognize the opportunities when they come along and find the courage to take that swing.

Maryanne Pope is the author of A Widow’s Awakening and the playwright of Saviour. She is the Founder & CEO of Pink Gazelle Productions Inc and the Chair of the John Petropoulos Memorial Fund. Maryanne lives on Vancouver Island, British Columbia.

8 thoughts on “The Knife”