Lessons From An Epic Hike

“Your soul knows the geography of your destiny.”

Have you ever had the experience of doing an activity - but having the sense that something else - something bigger - was going on? Click To Tweet

That happened to me recently – on a rather epic hike with my friend, Lynne.

“It’s just a two-hour hike,” she says to me, over morning coffee at her place.

I had stayed the night in their guest room and had finally sauntered upstairs for a late & leisurely breakfast on the back patio.

Eleven hours later, we staggered (literally) back to the patio for beer and burgers. And let me tell you, was that burger ever good!

Technically, Lynne was right. If one parked at the correct trail head on Sumas Mountain (near Abbotsford, BC), then yes…the hike to Chadsey Lake would be a mere two hours. In fact (we later learned), one could even park closer than that to the lake…just a short 20-minute stroll through the woods for a refreshing swim in a cool mountain lake on a scorching July day.

But, as you may have guessed, WE didn’t park at either of those places. Oh no, we parked at the very bottom of the mountain. Our first clue should have been that the sign at our trail head didn’t even mention Chadsey Lake. Minor detail…that turned into a very large, nine-hour detail.

But at least we were prepared. We’d eaten a good breakfast and lunch, we had snacks, we had lots of water, good hiking boots, hiking poles (love my new poles!), band aids…and the right attitude.

By hour three, we knew something wasn’t right. But we made the decision to keep going – partly because the little blue dot on my phone told me we were heading towards the lake and partly because other hikers coming down the mountain reassured us that yes, the lake did exist. Unfortunately, the other hiker’s sense of time was somewhat askew because “just forty-five minutes more” was NOT forty-five minutes.

With hope in our hearts, onward we trudged, huffing & puffing up the mountain, one slow step at a time. 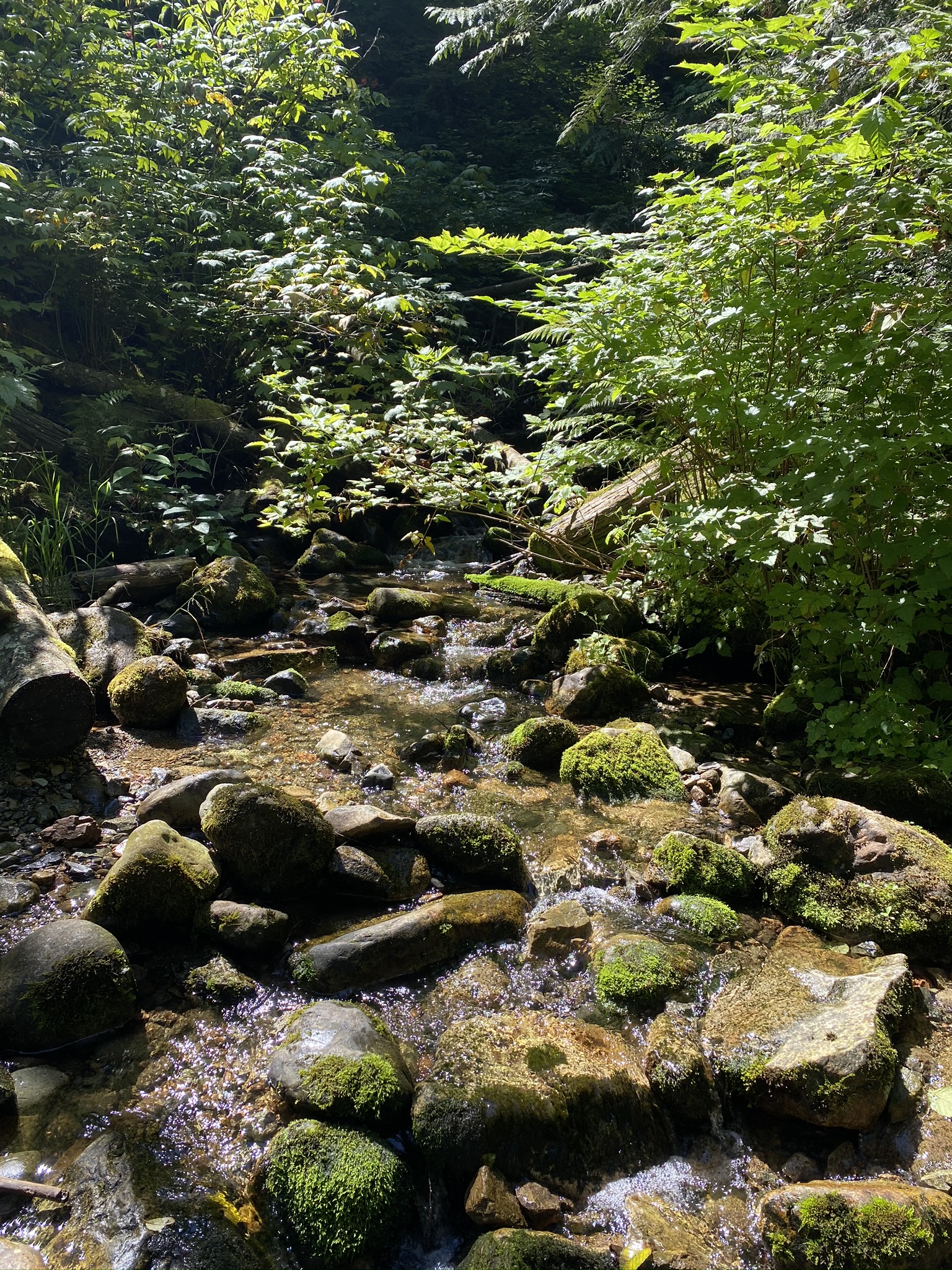 But then, when we were about fifteen minutes from the lake – and dreaming about how cool, refreshing & peaceful our long-awaited swim would be – we heard what sounded like a herd of happy elephants thundering up behind us.

Wearily, we turned around.

It was a herd of happy kids, bouncing up the trail…in not the most sensible of footwear, let me tell you. The lone adult accompanying this gang of cheerful children was carrying a HUGE bag over one shoulder (a inflatable kayak we would later learn). Once they’d passed us (which didn’t take long), Lynne and I looked at each other.

Because, of course, they hadn’t. They’d parked at the lot just a few minutes down the trail. But we didn’t know that…yet. All we knew was that the pinnacle of our epic hike – a serene swim in a quiet mountain lake – was now going to be rather…noisy.

Alas, we soldiered on to our destination. 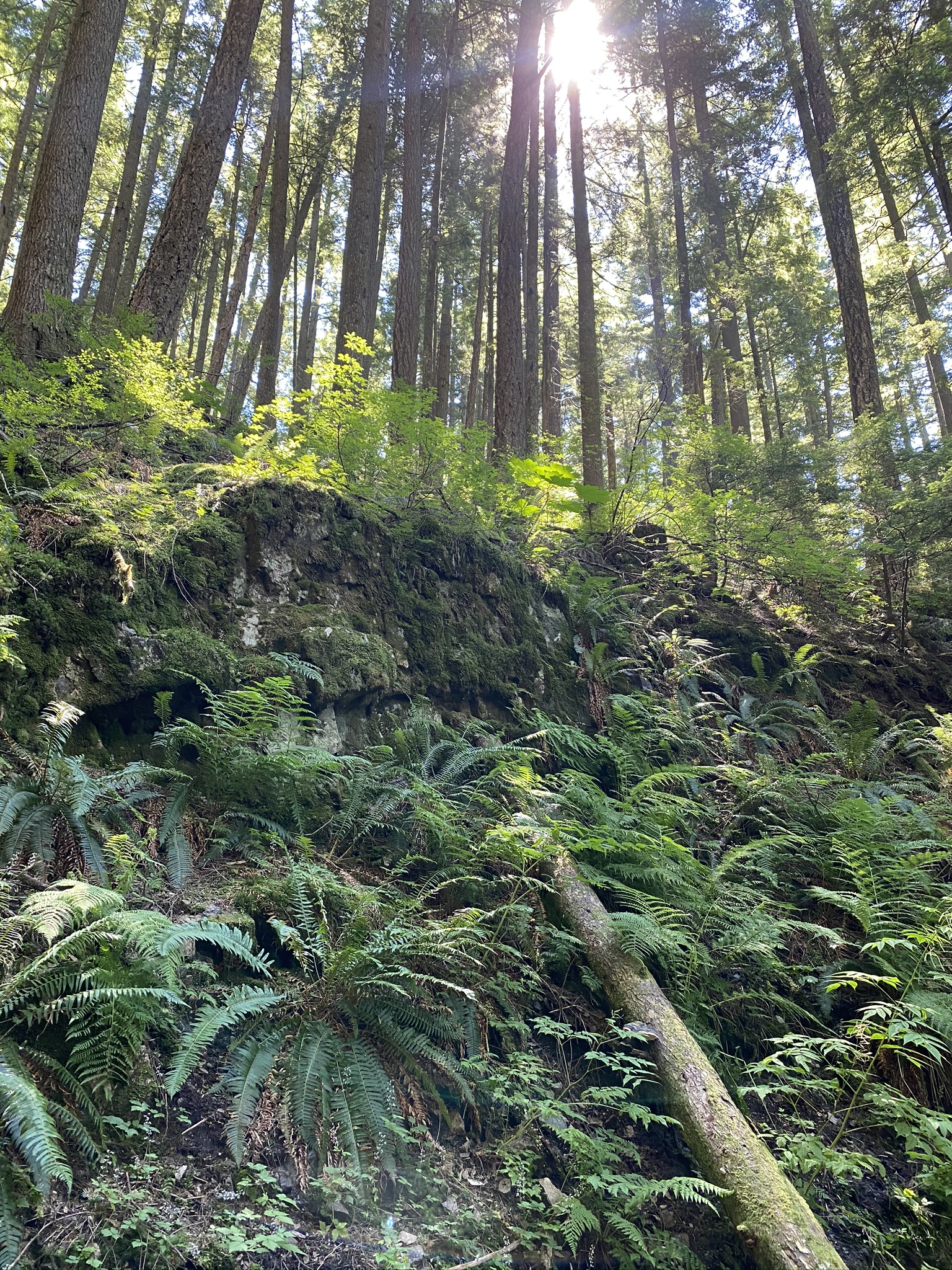 And when we finally arrived, sure enough the mountain lake of our dreams rather resembled a backyard pool filled with screaming children.

So what did we do?

Why we kept walking, of course…around the lake. I still don’t know why we did this. I mean, after hiking five hours up a mountain on a hot day to swim in a lake, wouldn’t you think we would, you know, swim in the lake at the very first opportunity?

In hindsight, I suspect our ability to reason was somewhat hampered by the heat and our exhaustion (never mind our confusion as to why a two-hour hike took five). Or maybe not?

Maybe deep down, we knew exactly what we were doing: waiting for the right opportunity (which is not always the first)? Click To Tweet

At any rate, when we were about a quarter of the way around the lake, we came across a perfect swimming spot with a rope swing (there are only two suitable spots to swim at this lake: where the noisy kids were and this spot).

We sat down and prepared to go for a swim. But then the oddest thing happened. On the other side of the tree that had the rope swing, there were three teenagers (two guys and a girl) with a beautiful black dog. The moment Lynne and I sat down, the girl stood up and loudly announced:

“WE ARE CONDUCTING AN ENERGY EXPERIMENT. IT’S A SPIRITUAL THING AND WE NEED TO BE ALONE. WE CAN’T HAVE OTHER PEOPLE NEAR US.”

Lynne and I looked at each other. Could this day get any weirder?

Always the chipper (and polite) optimist, Lynne said to the girl: “Oh…you just conduct away. Energy-work is good! We won’t bother you.”

The girl shakes her head and starts packing up. Which is when one of the guys looks over at us and sheepishly confides: “We just took mushrooms.”

Then the second guy (who has since moved closer to us) looks over, smiles (rather slowly) and says: “But do you know…I think our paths have crossed for a reason.”

Perhaps. But I’m not going to wait around to find out what that reason is…at least, not his version of it.

I sigh. My long-awaited swim is so close and yet so far.

Naturally, Lynne protests this. But I just shake my head and wander off down the trail. Eventually, she follows.

Of course, we didn’t find another spot to swim because there WAS no other safe place to swim, because of sunken logs. So we walked all the way around the lake (what’s another hour or two when you’re on an epic adventure?) and ended up right back with the screaming children (who had just returned to shore after a very boisterous paddle in their inflatable kayak).

If you can’t beat them, join them. Within seconds, Lynne and I were in the lake, screaming and laughing alongside the kids 🙂 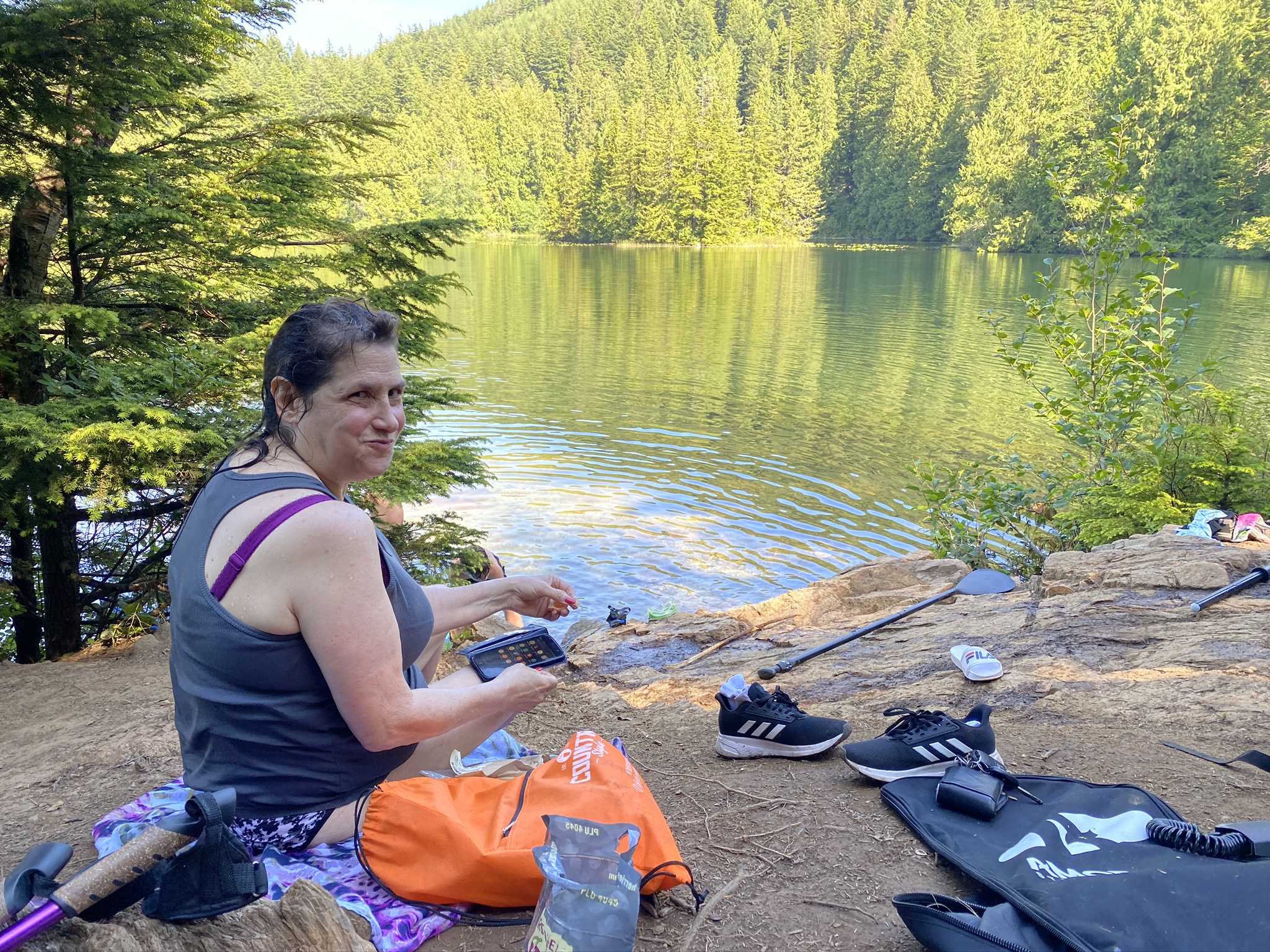 Then began the mammoth hike back down again. Two hours later, Lynne had a better idea: call her husband to come and pick us up halfway down the mountain! We dutifully gave him the instructions to the logging road we thought (we were positive) intersected with the trail. Her angel of a husband and daughter kindly agreed (!) to come and pick us up on the logging road, so we wouldn’t have to walk all the way back to our car.

In theory, this was a great idea (if you have the sort of easygoing family who will go along with it). Only problem was, at that point we still didn’t know about the different parking lots. We thought the logging road was THE parking lot. In hindsight, however, this doesn’t make much sense either.

Sure enough, the GPS directed Lynne’s husband and daughter to the two upper Chadsey Lake parking lots – neither of which was anywhere near the logging road we were waiting at…getting eaten alive by swarms of mosquitos.

We never did find each other. And so, down the mountain Lynne and I limped, like two old ladies being held up by hiking poles. I would like to say we were determined to finish what we started. But that’s a lie. We had no choice but to get ourselves back to our car…so we made the best of it.

Over beer & burgers on the patio, the four of us had a good laugh over the multiple mix-ups. It ended up being a nine-hour hike. Or, as Lynne prefers to say: “Four and a half two-hour hikes.”

On that note, I thought I’d look at this epic hike from a spiritual perspective…the “something bigger” that I sensed was going on that day. Here are a few insights: 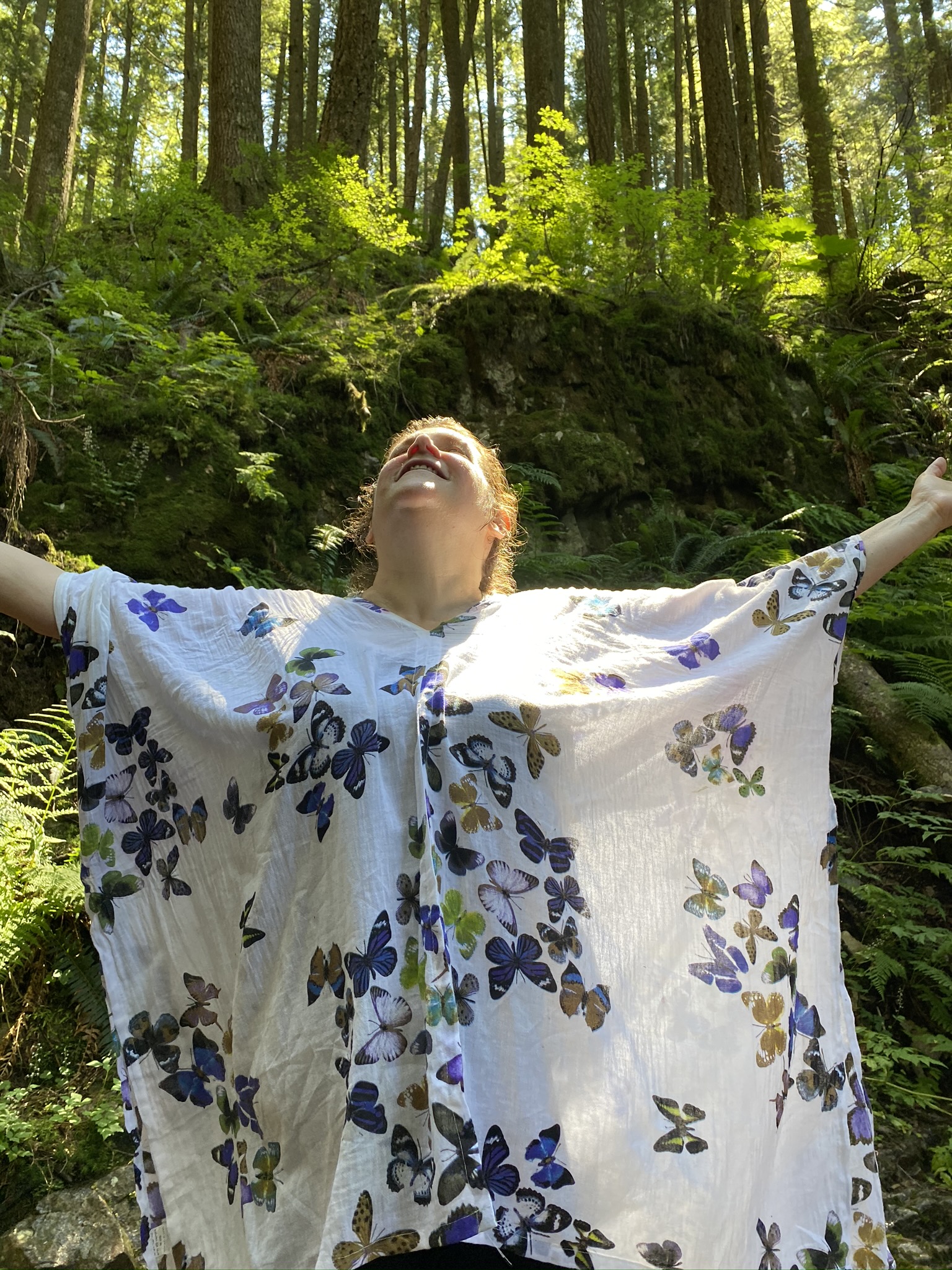 Maybe it’s just the imaginative writer in me, but upon further reflection, I get the sense that my epic hike with Lynne (who is, I’m sure, a soul friend) was my soul’s weird and roundabout way of showing me that I DO know what I am doing. I just have to keep the faith, do the work, day in and day out…and enjoy the journey towards achieving my dreams.

What is your “mountain lake?”

What dream or goal do you KNOW you will achieve...even if it is taking you a heck of a lot longer than you anticipated? Click To Tweet

6 thoughts on “Lessons From An Epic Hike”