“If I had a dollar for every compliment I have received about my art at craft shows, I would be very wealthy.”

Amen, sister. I hear ya. I feel your pain. I’m pickin’ up what you’re puttin’ down.

Ahhhh…the trials and tribulations of a craft show vendor.

But I can’t say I wasn’t warned.

Two days before the craft show, my friend, Andrea, who has worked as a vendor at hundreds of shows and markets over the years, gave me the low-down.

“Oh yeah,” she replied, with a knowing smile. “But first, they’ll tell you that they’re just going to take a quick look around at all the other booths – and then they’ll be back.”

“Very rarely,” she said. “But don’t worry because there are also the people who know what they like when they see it – and they are willing to buy it, right then and there. But those people are usually few and far between.”

Now that I have a whopping ONE craft show under my belt, I am going to take a leap and offer this subsequent observation:

And of this 40% of people who actually reach deep into their wallets and pry their precious cash or credit card from its cozy nest, I suspect that a good 10% of these are other craft show vendors who want to support their fellow crafters/artisans/writers/chefs/creators, etc.

I am NOT a browser.

When I shop, I shop. I go in, I get what I went for (as fast as possible) and then I leave…whether it’s artsy crafty stuff, groceries, booze, clothes or a flippin’ car.

I’m not a tire-kicker. But based on my, albeit limited, experience as a craft show vendor, it seems to me that many people are tire-kickers…or at least they are this early in the Christmas shopping season.

I almost got the feeling that attending a craft show was, for many people, more of a social activity than a shopping trip. Sorry – but this, I don’t get. I would much rather be out walking my dog or reading National Geographic on my couch.

However, I do get why people feel the need to browse at a craft show. At the show I was at, there were an awful lot of beautiful wares on display. As a seller, the competition for limited dollars is fierce. But what all that choice did to me, as a shopper, was make me feel rather overwhelmed!

Okay, on to the next rant: so what is with all the, er, ladies of a certain age (60 plus), who drag, I mean bring, their poor husbands to a craft show? That’s not to say that all men dread craft shows – but the vast majority of the husbands I saw certainly looked as if they would rather be having a root canal done…or perhaps sitting in the comfort of their own home, catching a ball game on the telly.

But no…there they are, standing in the cramped craft show aisles, blocking the path of the middle-aged ladies traveling in slow-moving (and, oddly enough, colour-coordinated) packs.

“Get out of the way!” I wanted to say to the forlorn and frowning husbands. “GO HOME!”

But what do I know? I haven’t had a husband in 16 years. Maybe some men of a certain age secretly love craft shows and are just pretending to be angry, bored and/or irritated?

This much I do know: even when I did have a husband, I can safely say that the last place he would want to spend a sacred Saturday afternoon is following me around a stuffy and crowded craft show. I sent him to a craft store once to pick something up for me, when I was in a pinch. Once is the operative word.

I KNOW this rule. But did I follow it? No. My skills as a saleswoman are, at best, so-so. Case in point was the young mom with an adorable baby strapped on her back.

She had been standing at my table for a good ten minutes, looking intently through the photo greeting cards and then had moved on to my book – at which point, I said, “Your little boy is sure enjoying looking at all the decorations on the stage!”

Young mom looked at me, frowned and said, “Yes, she is very alert.”

Then off she went, wallet untouched. Mind you, she didn’t lie to me – like all the other browsers – and tell me she’d be back after “doing a lap around the room…just to see what else is here.”

By the end of the second day of the craft show, if I heard one more person say that to me, I was going to scream: “Liar, liar, pants on fire!”

As for Andrea’s prediction about all the browsers who love to stand at one’s display table, oohing and ahhing over all the items and then sashay off? Boy, was she ever right. 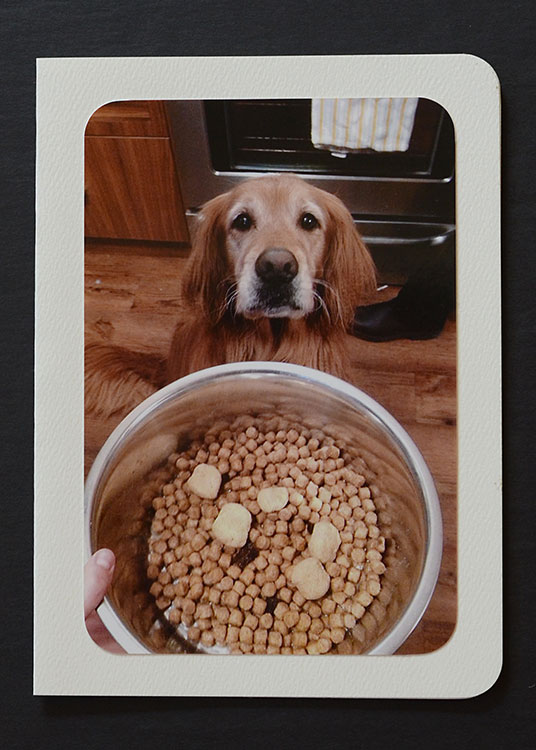 You would not believe the number of people who stopped at our table, squealed with delight when they saw the above card with the photo of Sadie, reached over and picked up said display card (so not in it’s protective plastic sleeve), turned to tell their friend (who had usually already wandered off), or their bored husband (who was blocking the way of paying customers), or us, some variation of:

“I LOVE THIS PHOTO! I had/have a Retriever and so does so-and-so and they would absolutely LOVE this card!”

And then, after grubbing up the photo with their sticky-bun fingers, they would put it back on the shelf and saunter off (bored husband in tow or in search of their friend) to fondle someone else’s wares.

As for what sells at a craft show and what doesn’t, I heard from other vendors that it’s a real crap-shoot. Sometimes people get all excited about the oddest things and then what you think will for sure sell, garners very little interest. Plus what sells well at one craft show may not sell at another.

Which brings me to my book, A Widow’s Awakening. Now, I’ve attended enough book signings, safety tradeshows and community events to know that selling a BOOK is challenging enough. But trying to sell a book with the word “widow” in the title is enough to send the vast majority of folks – men and women – fleeing in the opposite direction. I have learned to accept this. 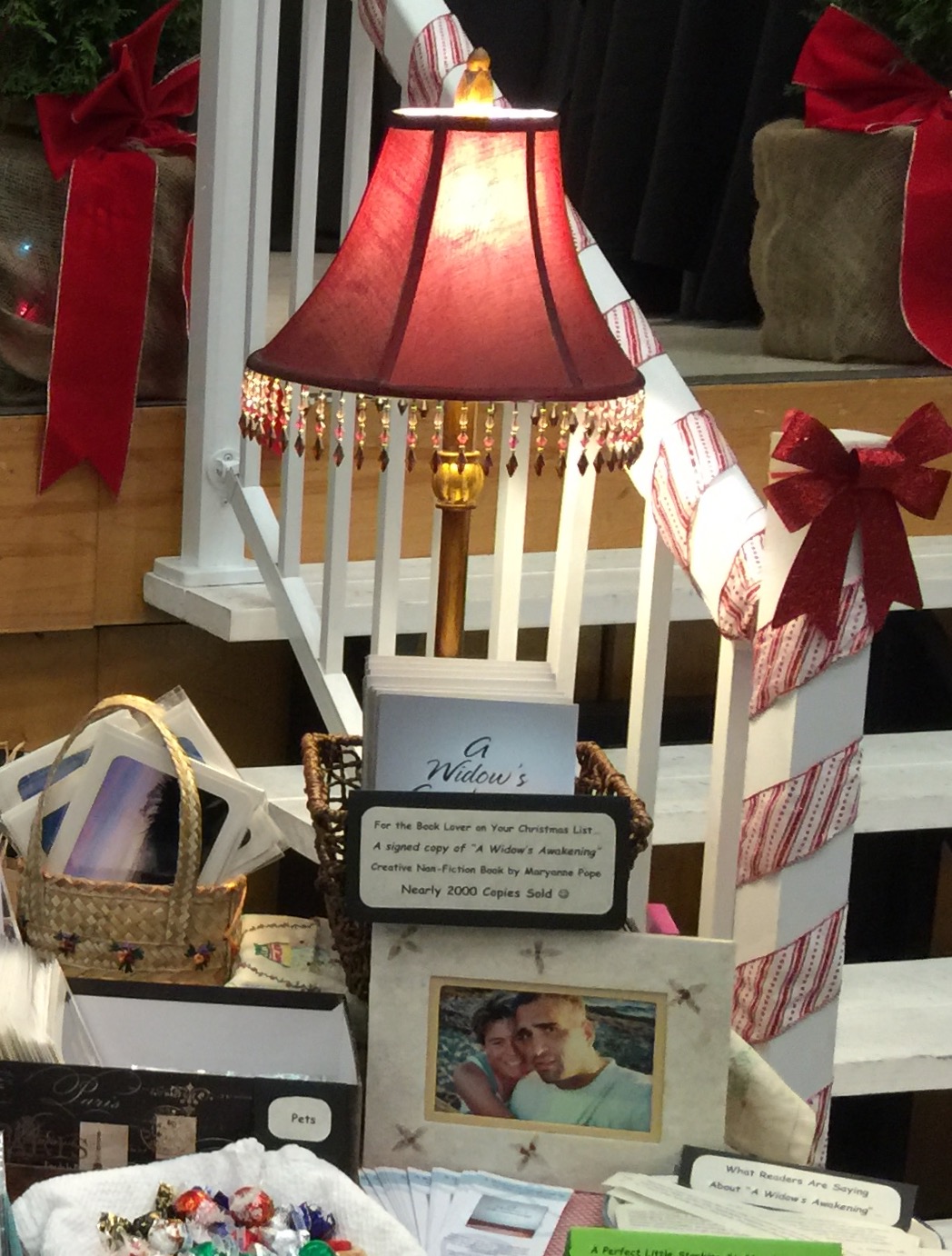 If I could go back in time and come up with a new title for my book, it would be something along the lines of Sex, Lies, Cash & Craft Shows. No wait…that’s the title of my next book.

It actually boggles my mind that despite the word “widow” in the title, I have still managed to sell nearly 2000 copies of the book. Thankfully, when a person does read it, the story usually hits a chord.

Anyway, knowing that the title of the book is a significant barrier to potential readers (unless they have been recently widowed themselves or know someone who has), I now have very low expectations of selling large quantities of the book at events such as a craft show. So I was pleasantly surprised that we did actually sell some copies.

In fact, despite the above rants, we did sell quite a lot of stuff!

The Wise Owl Wisdom Inspirational Quote Cards were a rock star hit, as was my niece, Melanie’s, Wax & Tissue prints, as well as the recycled Christmas cards (people loved poking through those and choosing their favourites).

Plus we had fun, met some great people (honest!) and learned an awful lot about human behaviour 🙂

So here’s a big shout out to all those people who DID buy something from the Pink Gazelle Cards booth (as for all you browsers, I’m not worried…I suspect we’ll see some of you again at the Last Chance Christmas Craft Show on Dec 10th and 11th), as well as to my helpers: Paige, Harleigh, Phyllis and Ella.

I am SO thankful that Paige was able to help me set up (and take down) the display table. As organized as I was ahead of time, I found having to put the booth together on Saturday morning, under a tight timeline, really stressful. Whereas Paige just calmly pulled it all together beautifully. 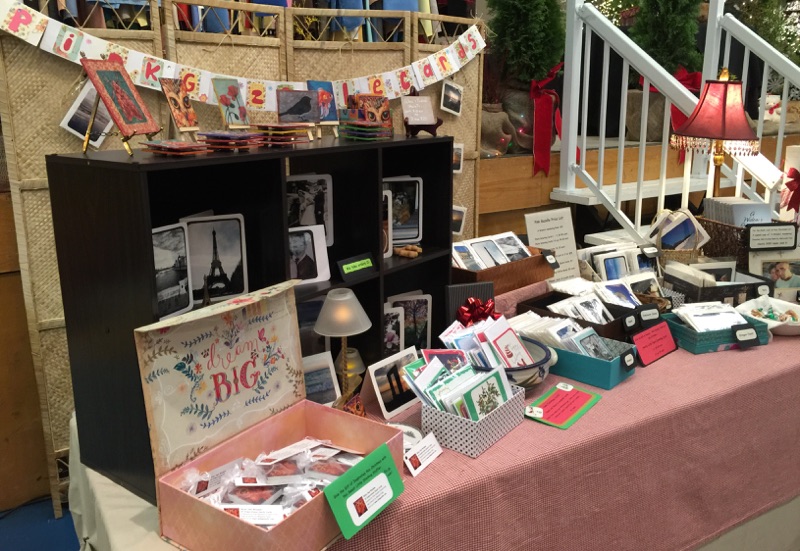 What sort of shopper are YOU: a browser, a browser who turns into a buyer, or a fast buyer?

What is your experience with craft shows – either as a vendor or a customer?