A Life Lesson Learned from the Garden

A Little Lesson from the Garden: Sometimes the Most Obvious Explanation is the Most Difficult to See 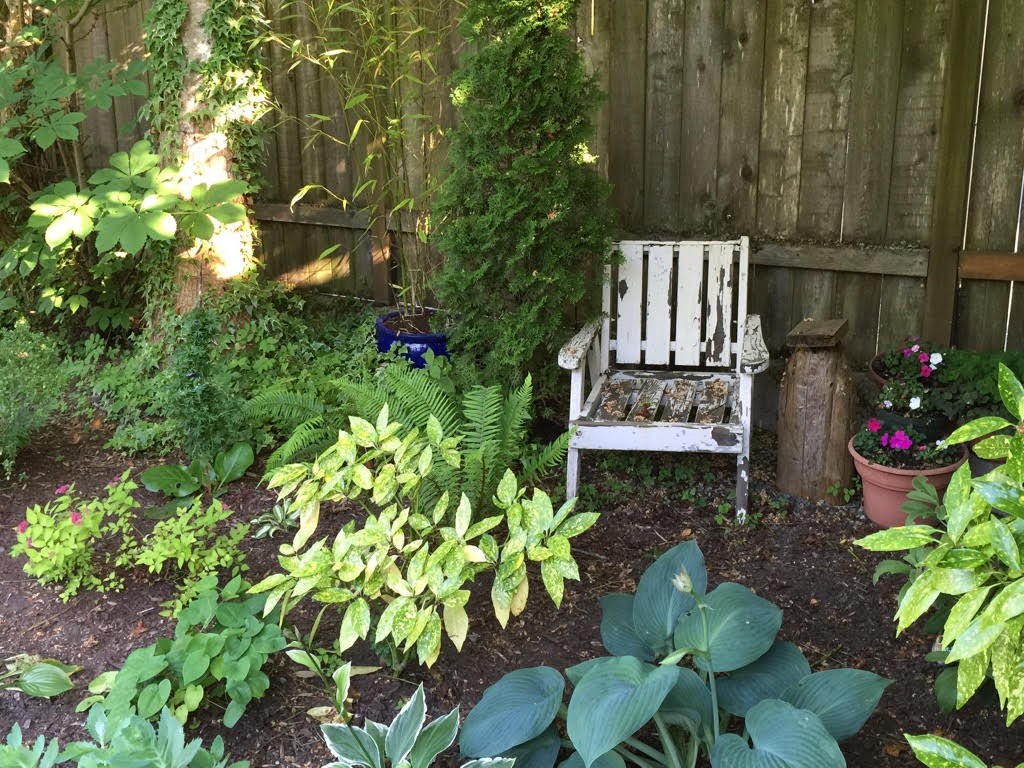 “It is the obvious which is so difficult to see most of the time.”

Sometimes I’m not the sharpest trowel in the tool shed.

I am now in the middle of my seventh summer in my home in Sidney, B.C.. That’s a fair amount of time spent trying to keep the plants in my back garden watered. So one would think (hoped) I would’ve solved this particular mystery significantly sooner than a few weeks ago – but no.

At the very back of my yard is a shade garden filled with plants that thrive in, well, shade. Now, although the shade garden is much fuller than it was when I first moved in, you would think from the amount of time, attention and water I have put into that garden, it would be far lusher than it is.

Every spring, I add new plants. I weed. I water. I put a mixture of soil, compost and manure around each plant. As spring turns into summer, I hand-water each and every plant every second or third day. I add fertilizer. I water some more. I prune.  I add more water.

That damn shade garden gets more attention than the entire interior of my home! 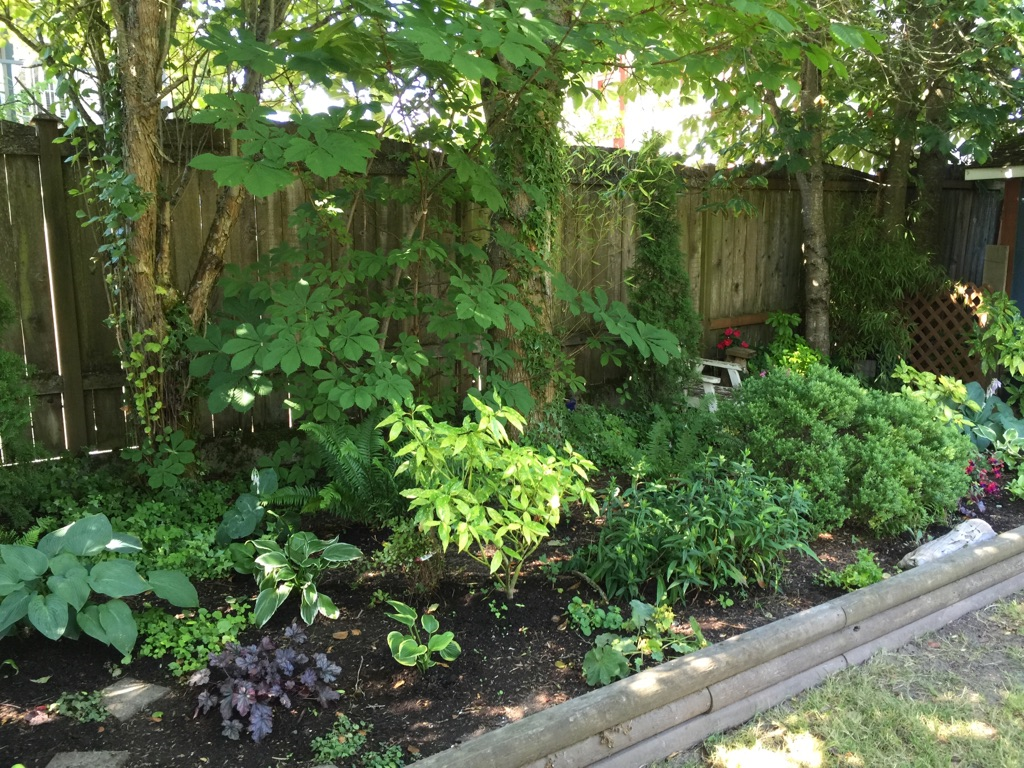 And yes, the plants are surviving but they aren’t exactly thriving. In fact, they pretty much stay the same size from year to year.

So a few weeks ago, when I was, again, diligently hand watering each plant, I got to thinking, again, about the possible reasons WHY the soil in said shade garden often looks like it belongs in the Sahara instead of a well-cared shade garden on Vancouver Island.

And it (finally) occurred to me that the source of the shade in my shade garden might well have something to do with the situation. So I did a quick tree count and get this: I have SEVEN massive trees in or near that shade garden. 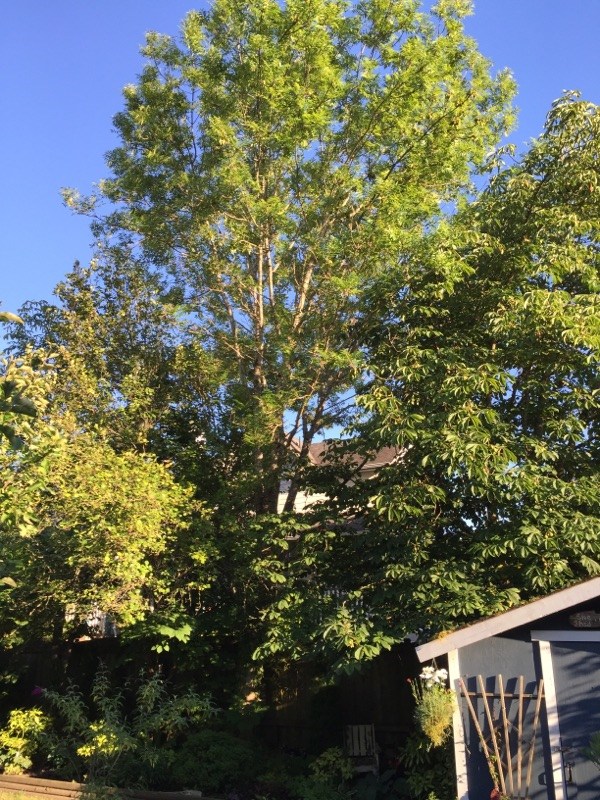 So the vast majority of the water I have been trying to give the smaller plants has been promptly getting sucked away by the extensive root systems of the big trees.

Though chagrined it had taken me seven summers to solve this rather obvious mystery, I quickly moved on to figuring out what the heck to DO about it.

I basically have five options:

1. Cut down some or all of the big trees (there goes the shade)

2. Keep the trees but pull up all the shrubs and other plants and replant them in large pots and planters so they won’t be sharing the same soil as the tree roots.

3. Install some sort of automatic irrigation system that is more water-efficient and less labour intensive.

4. Don’t change anything – just keep manually watering the damn plants all the time.

I then mentioned to a friend I was writing a blog about my shade garden revelation because I suspected there may also be some sort of analogy to life lurking in that soil…something about how the massive root systems of the big trees are sucking up all the water I am trying to give to the smaller plants – and how this is often people roll, too.

For let’s face it: try as we might sometimes to change something in ourselves or our lives that we know isn’t working, if we don’t first recognize the source – be that another person/people, project, job, habit/s, situation, our own attitude or negative thoughts, etc – that is sucking the lion’s share of our time and energy (and perhaps money), despite our best efforts, things are NOT going to change.

To this bit of brainstorming, my friend nodded.

“Yes,” she said. “I get where you’re going with that. But there’s a significant difference between the smaller plants in your garden having their water sucked away by the big trees – and a person who is being sucked dry by another person, circumstance, their own negative attitude and so on.”

“The person who is being sucked dry by whatever seemingly stronger force is allowing that to happen,” she continued. “They may not think they have a choice to make a change – but they always do. It just may not be pretty.”

Then, a few days later, I told my neighbour about how I’d unearthed the mystery of my perpetually dry shade garden (I didn’t share the analogy to people – he already thinks I’m pretty flaky).

To which he smiled and promptly asked, “And have you ever wondered, Maryanne, why the cedar bushes between our two backyards are so huge?”

I glanced over at the, admittedly rather large, cedar bushes – then looked back at my neighbour. 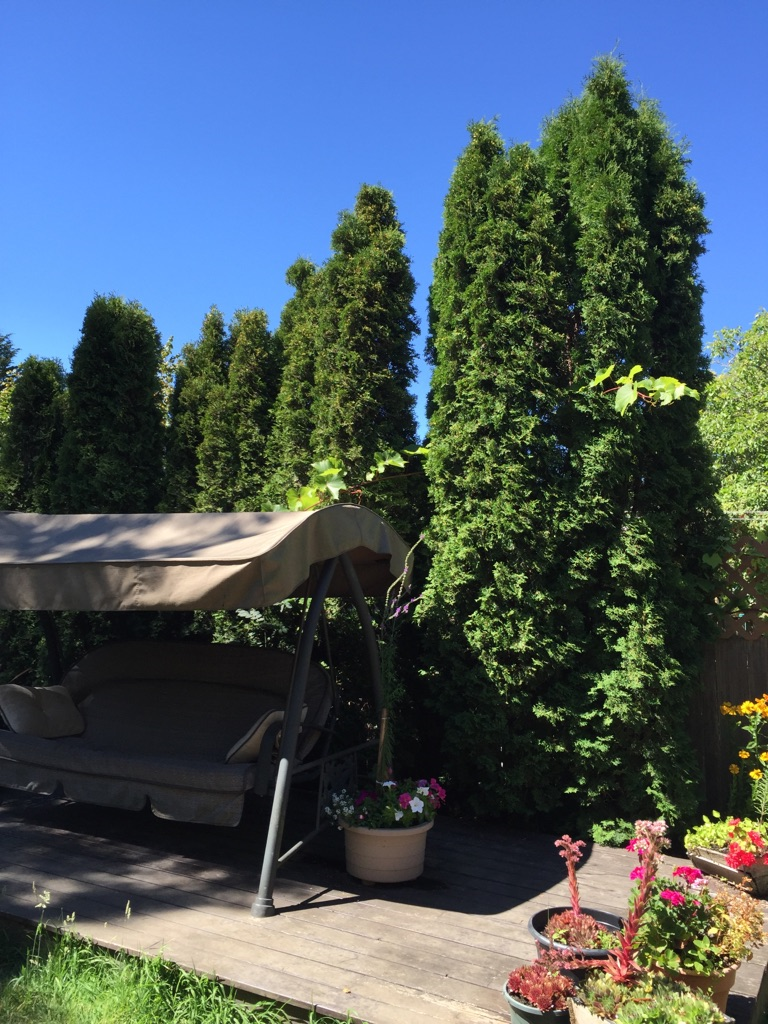 “Uh…no,” I said, suspecting I was in for another revelation, “actually I haven’t.”

Because come to think of it, I had NEVER watered those damn cedar bushes – not once in seven summers.

My neighbour smiled kindly (he is very polite) and said, “My pond had a slow leak for years. But I finally fixed it last year, so you may have to water those cedar bushes at some point.”

I threw back my head and laughed.

So there you have it: no shortage of life lessons to be learned from the old garden.

If you aren’t thriving like you know you could be, take a look around at what – or who – might be sucking you dry by stealing your precious time or energy. Sometimes the obvious answer is difficult to see.

Likewise, if something in you or your life is blossoming beyond reasonable explanation, there just might be a secret source of…irrigation coming from somewhere 🙂

Butt Ugly – Are You Spending Time with People Who Bring Out the Worst in You?

4 thoughts on “A Life Lesson Learned from the Garden”