Getting to the Heart of the Matter – To Be or Not To Be…a Mom?

“It’s about what you really want out of life – not what you’re supposed to want.”

To be or not to be…a mom? That is the question in the hearts, minds, souls and ovaries of millions of women today.

And if you’re already a Mom, have made the choice not to become one – or have accepted that motherhood is not in the cards due to circumstance, then you have a great deal to offer those women still in the “should or shouldn’t I?” camp.

So whoever you are and wherever you’re at regarding motherhood, thank you for reading Mothering Matters!

I was in the “should I or shouldn’t I?” camp for oh, about two decades of my life. But now, at 47, I can safely say the motherhood ship has sailed – without me on it.

But believe me, answering the question, “to be or not to be a…a Mom?” was a long, slow and often difficult process that I did not take lightly. And it is only now that I’m through that phase of my life, that I can breathe a huge sigh of relief that I didn’t take the full-time motherhood path.

For in the end, it was the process of living my life that revealed to me the answer.

I was 32 when my husband passed away suddenly, as the result of a workplace injury. One day he was here; the next day gone – and we hadn’t quite got around to starting a family. In an instant, the motherhood decision was made for me…by a missing safety railing, of all things.

But honestly, my husband and I hadn’t come to an agreement about whether or not we actually wanted kids, even though we’d been together for 12 years. At the time of his death, he was pretty firmly in the no-camp, whereas I was on the fence.

And so, onto an already overloaded grief barge, I plopped the motherhood issue and embarked upon a 15-year voyage of exploration to determine if becoming a mom was still a possibility…and if so, in what capacity?

In the first few years as a young widow, I looked to my girlfriends to learn why they were choosing or not choosing to become mothers, or how they were coming to terms with what life had chosen for them. Here were a few of my findings:

“People have said to me, ‘You’re not contributing anything, are you?’ I think they’re ruining the planet having five children but I don’t say that to them. I’m sure many people are having children because they want them – but some are having kids for their own egos. They want to see what they can make. Go take a pottery class, don’t wreck someone’s life.”

“You don’t have to have a child to be a mother.”

“At my age, not having children is, at times, extremely lonely. At other times, it’s very freeing.”

– Colleen, 50, married, no children, could not get pregnant due to ovarian cancer

“If I didn’t have kids, I would be feeling very unfulfilled right now.”

“I would ask yourself some tough questions. Do you really want to have a child? What’s underneath that decision? Why have one? What do you want to accomplish bringing a child into this world? Are you having a baby to be loved or needed? How much are you willing to give up? Do you really know what it’s like to have a child?”

– Esther, 35, married, no children, does not want children

“Make sure you’ve accomplished a big part of what you want to do in life. Don’t rush into motherhood because sometimes the child pays the price.”

Then I asked my own Mom about the matter.

“You know too much,” was her reply. “Of course, being a mother is challenging – if you knew ahead of time just how much work it was going to be, you probably wouldn’t do it. But that doesn’t mean it isn’t worth doing.”

Then she thought a moment and added, “But for God’s sakes, Maryanne, if you do have kids, don’t stop working outside the home for too long. Keep your foot in the door of your career…even if it’s just a day or two a week.”

How blessed am I to have such wise (and honest) women in my life?

In fact, so much so that in 2005, we put some of these women on a boat together to get to the heart of the motherhood matter – and filmed the discussions. The result was a documentary entitled, Whatever Floats Your Boat…Perspectives on Motherhood, produced by my company. 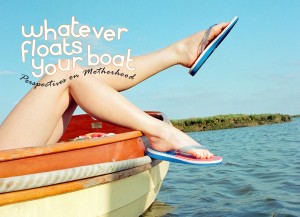 The 53-minute film captures my personal journey of whether or not motherhood was a path I wished to travel. “To be or not to be…a mom?” was indeed the question of the weekend as 11 women set sail on a houseboat to discuss the choices and responsibilities associated with the motherhood decision.

But what floats one person’s boat can threaten to capsize another’s – as perhaps you can imagine from the very different opinions expressed above. But that’s what makes the film real.

To view the 53-min documentary and/or the 20-min facilitated discussion on-line, here is the link.

And what’s the conclusion I reached on the boat?

That even 5 years after John’s death, I was still grieving – and therefore, although I was 37 at the time, I was still in no shape to even be considering motherhood.

Or…had I subconsciously been prolonging the grieving process, so as to stall on moving forward with a new life with a new partner that may potentially include children?

For it is only when I look back now, a decade later, that deep down I think I already knew the answer to the motherhood question. Because if I really wanted to become a mother, then that’s where I would have put my efforts in my 30’s: finding a new mate and/or determining in what form motherhood would take for me – giving birth, adoption, fostering or otherwise – and then taking appropriate action to make it happen.

Instead I spent my 30’s and early 40’s developing my craft as a writer, building my business, working with the charity in my husband’s memory to raise public awareness about the importance of workplace safety – and producing a documentary that could be of help to other women struggling with the motherhood decision.

In other words, my actions revealed where my heart really stood on the matter: I was a Mother-at-Large in the making.

Although hearing other women’s perspectives certainly helped guide me to shore, at the end of the day, the only person who could set my sails – choose the direction I wanted my life to go – was me.

Shakespeare again said it best: To thine own self be true.

So for many years, I sat on the dock, alone, trying to determine what I really wanted out of life, what effort I was prepared to put in to achieve it, and what sacrifices I was willing to make along the way.

“It’s about what you really want out of life – not what you’re supposed to want.”

But sometimes the clatter of cultural and societal expectations, the pressure from peers and family, the chiming of the biological clock and the fear over possible future regret makes it rather difficult to determine what that is.

Terri, bless her candid soul, hit the nail on the head with her blunt observation that many people get caught up in the making and having, or acquiring, of said child instead of taking the time to think through the reality of the time-consuming, expensive, exhausting, nitty-gritty, day in and day out relentlessness of raising the little gaffers into responsible adults.

So one day, I took Esther’s advice and asked myself a very honest question: is looking after a child, and all that entails, how I really wanted to spend my days, my nights, my life, my energy, my love and my money? Because if there was any shadow of a doubt, then there was my answer.

Because the motherhood decision wasn’t just about me. More importantly, it was about the child.

Which brings me back to the documentary. Ten years later, I can honestly say the only thing I would change about the film is its title (well, okay…I would also have got my hair styled for the interview – it looks awful!).

For although “Whatever Floats Your Boat” is catchy and fitting, it also suggests that the motherhood decision is, in fact, entirely up to the woman – and/or her partner. But it’s not. It’s also very much about the future child…and I think sometimes this rather obvious fact gets lost in the shuffle.

As such, my advice to women who are working their way through the motherhood decision is this: take the time to first figure out what floats your boat – what you want your life to look like – and then make an honest, responsible decision as to whether or not a child truly fits into that picture…not just the beautiful family photo at Christmas time.

As for me, moving forward? Well, I’m only 47 and single. So what if I meet a great guy who has young children? What then? Would I walk away?

Because now I know the conditions I need in my daily life to be happy, productive and peaceful.

I know what I need and want to do in a day…for work, play and solitude. My life thus far has taught me what I can – and more importantly, what I cannot – sacrifice.

However, I also know how much love I still have to give and lessons to learn. So if the right fellah comes along, I’m open to figuring out how to share my life with him and his kids, in a way that doesn’t compromise the life I’ve worked so hard to build out of the ashes of loss.

Although my own Mom is no longer with us, all the good advice she gave me over the years is alive and well. And when I think back now to what she said about the importance of keeping my career going part-time – had I chosen the full-time path of motherhood – I wonder if perhaps I can tweak that a little…into full-time career and part-time motherhood?

Time will tell. And that, my friends, is the heart of the motherhood matter for me at the moment 🙂

Stay tuned for next week’s Mothering Matters blog entitled, Parenting Pets – Why We Fuss Over Our Furry Friends.

Maryanne Pope is the author of A Widow’s Awakening and the playwright of Saviour. Maryanne is the CEO of Pink Gazelle Productions and Chair of the John Petropoulos Memorial Fund. To receive Maryanne’s Weekly Words of Wisdom blog, please sign up here. To subscribe to the Mothering Matters blog series, here is the link.