Hold Onto What Has ROOTS

Tip: If You Are Going to Hold Onto Something for Dear Life, Make Sure It Has ROOTS 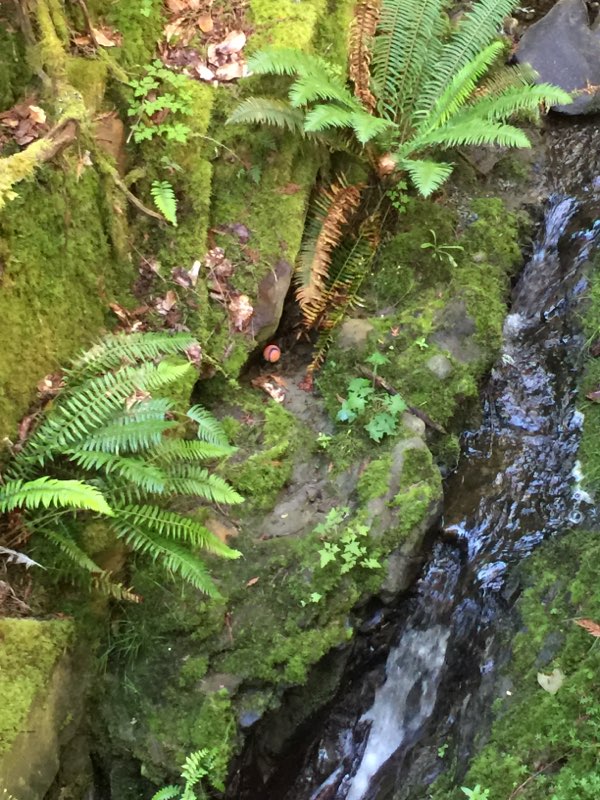 “A tree with strong roots laughs at storms.”

Hallo…hope you are having a super summer!

If you look closely at the above photo, you will see an orange & blue Chuck-it ball precariously perched on a ledge at the bottom of a small ravine. That ball was (I suspect) strategically dropped there by a certain retriever, just to test how good MY retrieving skills were.

But I didn’t fall for THAT trap…oh no, no! I knew better than to clamber down a steep and slippery embankment in the middle of the woods with no one around (other than Sadie) to pick up the pieces, should things happen to go awry.

So home we went.

But I have hung out with this particular retriever far too much to be able to actually forget about the ball. So when big brother came to visit two weeks later, I took him on the hike and showed him the ball (which, of course, was still on the ledge because who in their right mind would go down and get it?).

Big brother looked around and did a quick risk assessment. He shook his head. “Not worth it. Leave it there.”

But as I mentioned, I have hung out too long with a ball-obsessed retriever…and now, apparently, have become one myself.

I shook my head. “I think I can do it,” I said, then told him my strategy.

He sighed and gave me the big brother look. But before embarking on my descent, I gave him a second orange & blue Chuck-it ball and told him to hold it in front of Sadie – but not give it to her. That way, she would remain with him and not follow me down.

So big brother did exactly as he was told and all went according to plan. Sadie stayed with him, her eyes unflinchingly fixed on the Chuck-it ball on his hand. I made it safely down the embankment, stepped over the creek, retrieved the ball, proudly put it in my back pocket…and then made a last-minute decision to go up that side of the riverbed – instead of stepping back over the creek and going back up the same side I came down.

All was going well until I reached out to grab onto a big rock – instead of the little tree – and the next thing I knew, the rock gave way and came crashing down onto my shin. Ouch! The rock was actually a large slab of shale that was just waiting for a good excuse to release itself from the dirt of the eroding riverbank.

And along came the human retriever.

On the bridge above my head, big brother calls out in alarm, “Googie, are you okay?”

“Yeah,” I reply sheepishly, crawling up the embankment to the bridge. “But just out of curiosity, what did Sadie do when I fell?”

There is an awkward silence then: “Uh, nothing. She didn’t even blink. I knew this dog was ball-obsessed but I have never seen such intense focus. It’s extraordinary.”

It’s also humbling. But at least I know where I stand in relation to a Chuck-it ball 🙂

There are several morals to this story – the most obvious one being to never risk one’s safety for a silly $7 ball. Another one might be: if you are going to hold onto something for support, you better make sure it has roots.

In this photo from a week ago, you can see the wound on my shin: 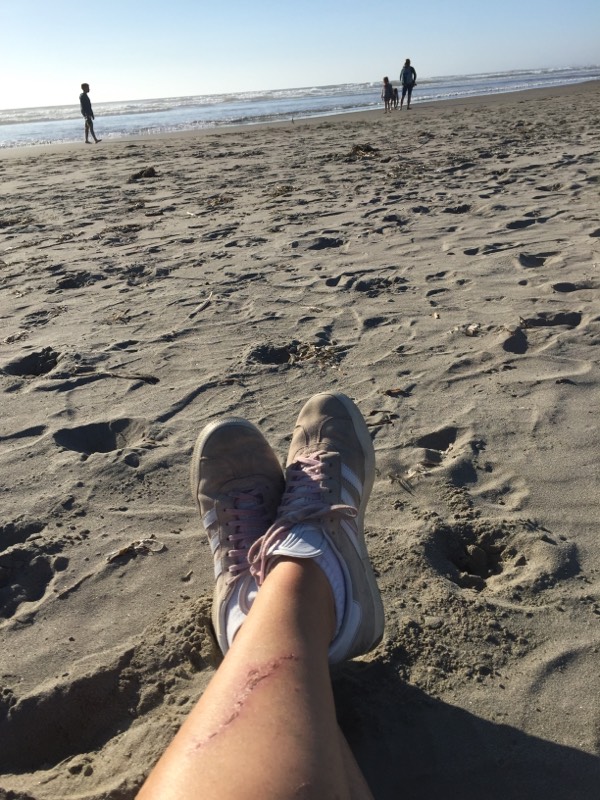 Thankfully, it is healing up beautifully.

Other than that, I have been having a lovely summer! I am taking full advantage of my quiet rental home in Mill Bay and am making tremendous headway on some writing projects.

I also took a road trip down to the Oregon Coast and Portland for a few days. Here are some photos:

Back home, Sadie is making like-minded friends at the local swimming hole:

Take care, stay safe and I shall smarten up and do the same!

Maryanne Pope is the author of A Widow’s Awakening, the playwright of Saviour and the screenwriter of God’s Country. She is the executive producer of the documentary, Whatever Floats Your Boat…Perspectives on Motherhood. Maryanne is the CEO of Pink Gazelle Productions and Chair of the John Petropoulos Memorial Fund. If you would like to receive her weekly blog, please sign up here. Maryanne lives on Vancouver Island, British Columbia.

4 thoughts on “Hold Onto What Has ROOTS”