PrevPreviousWanna Win a Gift for YOU? Quick Christmas Contest!
NextPut It Out There – Whatever “It” is For YouNext 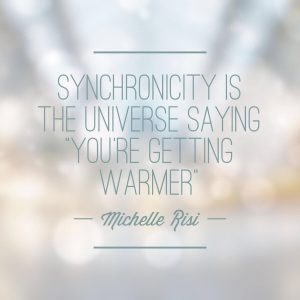 I hope you had a delightful holiday season and I wish you all the very best in 2017!!

I had a wonderful Christmastime…literally. The days were wonder-full. Enough so, that I thought I’d share a few of the incidents that happened, as they certainly lend themselves to the possibility of synchronicity.

You are probably familiar with the term “synchronicity” but if not, it is a concept first explained by psychoanalyst, Carl Jung (1875-1961), and refers to events that are “meaningful coincidences” i.e. they occur with no causal relationship yet seem to be meaningfully related.

I have experienced an awful lot of meaningful coincidences in my life, especially around the time of my husband, John’s, death in 2000 – particularly the events that occurred at Disneyland exactly one week before he died.

Mind you, I was probably more open to the strangeness of the seemingly unrelated – yet somehow connected – events because of the shock of his sudden death and the immense impact that had on my heart and soul.

“Synchronicity is an ever present reality for those who have the eyes to see it.”

In her beautiful essay, Synchronicity and the Soul, Nancy Seifer explains how “Jung recognized that synchronicity…had the effect of breaking through the “rationalistic shell” of the modern scientific mind. It is a form of coincidence powerful enough to shatter the notion that material science has discovered all there is to know about the universe. To the person having an experience of synchronicity, the realization dawns that a mysterious force is at play in the world—a kind of “cosmic clock” whose gears operate on a more subtle plane.”

But to what end? Are we to be taking something from these synchronistic experiences?

I think so. So does Seifer:

“As the soul awakens, it turns to the “task” of uncovering the meaning of life experiences, attempting to discern what each new circumstance may be trying to teach us. The discernment of meaning is integral to advancement in this schoolhouse of life. Once the needed learning has been extracted from difficult lessons, they no longer have to be repeated. By observing synchronicities and trying to fathom their meaning, we are drawn into the world of the soul, thus accelerating our progress on the path of transformation.”

– Nancy Seifer, When the Soul Awakens.org

Here are 3 synchronistic events that happened to me over the Christmas season – and what I am choosing to learn from them:

#1) My Sexy Coast Guard – or rather his Mother

Last spring, I met a really nice woman on the beach when we were both walking our dogs. We got chatting and lo and behold, she has a son about my age who is single and perhaps I might like to meet him?

A few months later, I run into his Mom on the beach again. She apologizes for his behaviour, says he has met someone else – and then asks me if I will stop by their place for a drink on Christmas Eve?

“Well,” I say, as politely as possible, “that might be a bit uncomfortable.”

End of story. So I think.

A few weeks later, I send Coast Guard guy a text – to clear the air between us. He texts back, apologizing for his actions but encourages me to go to his Mom’s place for Christmas Eve. He won’t be there anyway.

But I like my own quiet Christmas Eve. Why would I go to HIS Mom’s place?

Then wouldn’t you know it, the day before Christmas Eve, I run into his Mom AGAIN.

“Please come by my place on Christmas Eve,” she says.

I throw up my hands to the Universe. Fine, I’ll pop by for an hour.

I stay for three hours, have lots of fun, drink too much, leave my car there and teeter home in my high heeled boots. And when I go to pick up my car on Christmas Day, guess who’s there?

And let me tell ya, Coast Guard Guy was looking really yummy – and no girlfriend in sight. After not one but two hugs, off I saunter to the rest of my Christmas Day festivities.

Two days later I text him. No response.

And just like that, I find myself back – AGAIN – in the frustratingly familiar situation of being smitten with men who are clearly not interested in me…and choose silence to communicate this.

I won’t tell you how many times this has happened with different guys over the years but let’s just say I feel like I’m in the movie, Groundhog Day. Surely at some point, I will learn whatever lessons need to be learned and be able to move on to a happy, healthy intimate relationship.

In the meantime, I think I shall write a book about my romantic escapades…maybe I’ll learn a thing or two. 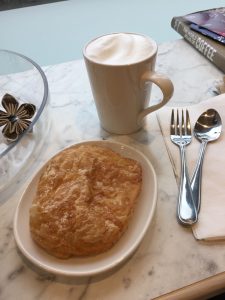 This story has a happier ending!

My good friend and colleague, Sarah, gave me a ONE HUNDRED DOLLAR gift card to a Victoria café called La Roux Patesserie. It’s one of my favourite haunts.

So, over the holidays, I decided to go to La Roux while my car was in the shop. I woke up that morning, thinking that I should text my friend, Heathe, to see if her gang would like to meet me there for a cappuccino and chocolate croissant. But then I thought to myself, “Nah…they’re probably busy.” So I didn’t.

Fast forward a few hours and there I am, at La Roux Patesserie, eating and drinking my way through the gift card when I hear a tap on the glass. I look up and there, standing on the sidewalk, are my peeps: Heathe, Dave, Taylor, Paige & Ella.

I must say I wasn’t one bit surprised to see them. We spent the rest of the day together and had loads of fun!

Moral of the story: when paths are meant to cross, they cross.

#3) Saviour and a playwriting contest about God & Faith

As you may recall, I have been writing a play script entitled “Saviour” for, well over a decade now. Sigh. Anyway, I knew the most recent version of the script needed some tweaks before I could move forward with it – but I hadn’t got around to making those revisions…for two years!

But then, a couple of days after Christmas, my graphic designer, Neil, sent me an e-mail with information on a playwriting contest that was specifically looking for scripts that explore God and faith. Hello…perfect fit for Saviour! The catch? The deadline was Dec 31st.

So I tossed my Bailey’s bottle and chocolate orange to the side, sat my butt in the chair for two days, got the Saviour script where it needed to be and submitted it to the contest. It felt great!

Lesson learned: whether or not I win the contest is far less important than the fact that I got the next Saviour rewrite DONE.

And here’s the really cool thing: the Saviour play is about synchronicity. I kid you not.

“For many awakening souls, the phenomenon of synchronicity provides a direct and unmistakable encounter with the mysteries of the spiritual realm. Because the experience has particular meaning to the individual involved, it has the power to open a portal to “the world of meaning,” which is the world of the soul in the wisdom teachings.”

– Nancy Seifer, When the Soul Awakens.org

Personally, I suspect synchronicity is the Universe’s way of letting us know we are getting warmer…just wish it was Coast Guard warm 🙂

What are your thoughts on synchronicity? Do you think there is sometimes a higher meaning behind seemingly coincidental events?

About the Saviour Play…

The Awakening – Tragedy as a Wake-Up Call

PrevPreviousWanna Win a Gift for YOU? Quick Christmas Contest!
NextPut It Out There – Whatever “It” is For YouNext

2 thoughts on “Synchronicity – You’re Getting Warmer”