An environmental plastic problem that needs to be wiped away 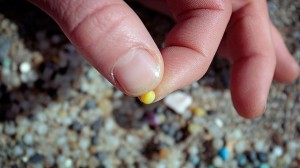 “Micro-plastics — defined as any plastic particle less than 5mm in diameter, which can readily be ingested by an organism — mostly arise from the breakdown of larger fragments. Others consist of plastic resin pellets — used as a raw material in the plastics industry, and sometimes referred to as ‘Mermaids’ Tears’ when found on the beach — which reach the ocean through poor waste management and accidental losses in transport.”

In his article, “Beware Mermaid’s Tears,” Kershaw goes on to say that, “Industry moves to reduce these micro-plastics have been partially successful, but the pellets already released will persist for many years to come. A third, more recent, source arises from the use of plastic micro — and nano — particles in such products as toothpaste and hand cleaners, which are not retained by wastewater treatment so end up in the ocean.”

Mermaids may be mythical but their tears aren’t.

These tiny plastic pellets are wreaking havoc on our oceans. The pellets, which can resemble fish eggs, are the result of industrial and residential waste. More durable forms of plastic do not bio-degrade. They break down physically to a degree, but the remaining mermaids’ tears can persist for hundreds of years.

Plastic trash — in the form of bottles, shopping bags, and other debris caught in fishing nets — is finding its way into our oceans. When sunlight hits the plastic debris, it releases chemicals and toxins and causes photodegradation, which breaks bigger plastic materials into smaller plastic particles. After it’s gradually broken down by sunlight into smaller pieces, the pellets find their way into chunks of seaweed and other floating garbage.

Some of these pellets wash ashore, while others remain at sea. Plastic particles have been discovered on beaches around the world and increasing amounts of plastics are also being detected in our oceans. A study by Dr. Richard Thompson, of the University of Plymouth, found there were an estimated 300,000 items of plastic per square kilometer of surface water and 100,000 per sq. km of seabed.

As you might expect, the impact of these pellets — many of which are smaller than a grain of sand — is not good for marine life.

Marine animals are eating plastic particles on the seabed and off the surface of the water. And once one animal eats that plastic it — and the chemicals it contains — becomes part of the food chain and has the potential to be passed on to other animals.

These mermaids’ tears are inedible, but they can fill up an animal’s stomach and cause starvation. Often sea birds will scoop them out of the water and feed plastics to their chicks, having fatal results.

“Particles may damage or block an animal’s digestive tract or other organs, depending on its lifestyle and the quantities involved,” explains Peter Kershaw. “Even more worryingly, plastics can absorb persistent organic pollutants (POPs), such as PCBs and DDT, concentrating them by up to a million times before being ingested.”

What you can do

Once the plastics are unleashed on the oceans, it’s virtually impossible to clean up the mess and extract the pellets from the water. Fishing out the debris simply won’t work. Instead, the most effective approach is to prevent the plastics from making their way to our seas.

That means reducing and recycling the plastics – in its many forms – in our lives.

“Plastic pollution may gradually become less of a problem if waste is considered a valuable resource — for recycling, reuse or energy generation — and if people accept more personal responsibility for the waste they generate.”

To find out more about Mermaids’ Tears – and what you can do to help – check out the Surfers Against Sewage Marine Litter Campaign.

Other Face the Future blogs:

Trash Island – The World’s Largest Landfill, Minus the Land