Birthday Card Karma – Can a Past Wrong be Made Right?

Have you ever dug your heels in over something silly with someone – and then later realized how ridiculous the whole thing was?

Looking back now, I’m not quite sure what bee I had in my bonnet about her birthday card that year but I sure had one. For whatever reason, I hadn’t got around to sending her a birthday card. But instead of sending her a belated one, I just called her on Dec 3rd and wished her a Happy Birthday.

“Thank you,” she said, over the phone. Then she added, “But I’m rather surprised not to have received a card from you.”

Now, what I should have said was, “Sorry, Mom, I’m running behind this year – but it’s in the mail.” And then got my sorry self to the nearest store, bought a REALLY nice birthday card and mailed it off. Problem solved, crisis averted.

But no, what did I do? I dug in my heels and decided not to send her one.

Several days later, she called me again, asking about her birthday card.

Instead of answering her, I heard myself say, “Do you know what I’ve been reading about this morning, Mother?”

“What?” was her equally cool response.

“I have been reading about the work of the Stephen Lewis Foundation in Africa. As you may or may not be aware, Stephen Lewis is extremely concerned about the fact that an entire generation of mothers and fathers have been wiped out due to AIDS. And because of this, grandmothers are having to raise all those orphaned children.”

I paused a moment, for effect, then continued. “So frankly, my dear, that seems to be a hell of a lot more of an important thing to be worrying about than your damn birthday card.”

And then, just in case I hadn’t done enough damage (and believe me, I had), I finished with: “And besides, you’re 88 years old…haven’t you received enough birthday cards by now?”

Okay, that was over the top. Who knew I could be so mean?

As perhaps you can imagine (particularly if you happen to have known my Mom), this did NOT go over well. I may have had a bee in my bonnet – but I’d just poked a hornet’s nest with big fat stick.

She was livid. And in the days to follow, she proceeded to tell every single member of our family (plus her friends, caregivers, most of the people in her apartment building and probably half of Calgary) what a dreadfully rude, ungrateful and insolent daughter I was.

Now, since my Mom’s hearing was pretty bad by that point, she hadn’t actually heard the “Stephen Lewis” part of my rant. Somehow she’d heard “Nelson Mandela” (who had just passed away so that was in the news), so not only did everyone have to listen to what a horrible person I was, they also got a slightly skewed version of our actual conversation.

Let’s just say I was on the receiving end of multiple phone calls from family members asking me what Nelson Mandela had to do with the missing birthday card.

But that’s beside the point.

In hindsight, I feel really badly for being so stubborn about a stupid birthday card. But at the time, the angrier she got, the more determined I became NOT to give her what she not only expected but demanded.

And every day for the next couple of weeks, whenever one of my brothers or sister-in-laws went to visit her, they would rather gleefully (for it was my turn to be in Momma Pope’s doghouse, which meant they weren’t) report: “Just checked the mailbox…still no card from Maryanne!”

Needless to say, by the time my Mom came out to my place to visit me in Sidney for two weeks over Christmas, she was not only good and mad, she was ready to get even…and the Universe was lining up beautifully to help her out. Serves me right!

If you haven’t read my blog from that crazy Christmas, you can check out The Christmas the Wheels Came Off.

In fact, so much real life drama happened over that two-week period, I’m writing a play about it. More importantly, however, those two weeks gave my Mom and I chance to get back on track after the birthday card incident. So when she passed away suddenly 3 months later, I knew she wasn’t still holding a grudge.

At least, I’m pretty sure I’d been forgiven.

But just to be on the safe side, in honour of my Mom’s birthday this year, I made a special card that I’ve sent out to all my family: 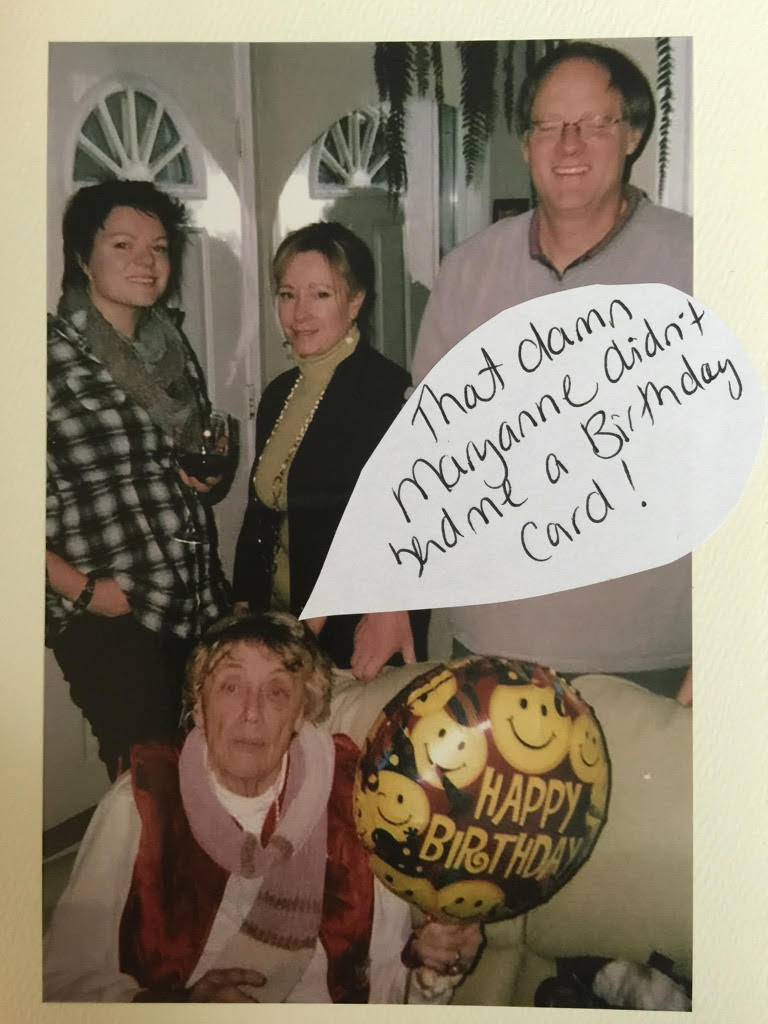 Wherever my Mom is now, I bet she’s smiling…even though it is two years late 🙂

Interestingly, the day I started to write this blog, I went to the mailbox and guess what was in there? A postcard from the Stephen Lewis Foundation, in honour of World AIDS Day on December 1st.

On the front was a photo of Ugandan grandmothers marching at a national gathering. On the back was a heartfelt message from Stephen Lewis himself, frankly stating that they simply don’t have enough funds to help the thousands of women and children struggling to survive on a daily basis.

And so, also in honour of my Mom’s birthday, I have put my money where my mouth is and made a small donation to the Stephen Lewis Foundation.

For silly squabbles aside, I am very grateful to have had a mother…and a damn good one at that, even if she was a little demanding at times.

If you would like to help the Stephen Lewis Foundation turn the tide of AIDS in Africa, here is the link to donate. Thank you.