The Tao of Re-Gifting

Tact, Timing and Titillation: The Tao of Re-gifting 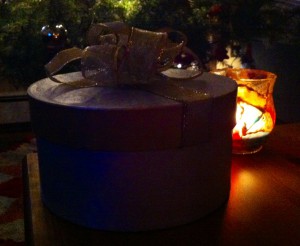 So…did you love ALL the gifts you received for Christmas this year?

If not, fret not. You can always re-gift! But if you do, discretion is advised.

Here’s a fun clip from the Seinfeld episode, The Label Maker, about the perils of re-gifting.

But there can be benefits, too. Many years ago (okay, maybe it was several years ago or maybe it was just last year), I received a box of thank you cards as a gift. At least, I think they were thank you cards. They were blank inside, so I suppose you could use them for any message. But the pictures on the front weren’t really…my style. I tried to use them. But month after month passed and the right occasion never seemed to come up. And I mail out a lot of cards!

To be honest, I just didn’t quite get them and felt a bit uncomfortable sending them on to someone who might be just as puzzled.

I finally gave up waiting for the right occasion to come along where one of the cards might be suitable to send. So I put them in a box to give away to goodwill and then put that in the guestroom closet (these things take time). And wouldn’t you know it but one of my guests last fall just happened to notice the box of cards.

Now before I continue, perhaps you’re wondering what kind of house guest would go through the boxes in someone else’s closet? She wasn’t! Rather, the 2000 pounds of stuff from my Mom’s place was due to arrive any moment and one of the items en route was a tall boy dresser that needed to go into said closet. Therefore my friend and I had to pull everything out of the closet and put it on the bed, so the movers could put the dresser in the closet. That’s when she noticed the box of cards.

And what did she do? She squealed with delight!

Apparently, her daughter absolutely loves squirrels and acorns (oops – I hope the person who gave me the gift in the first place isn’t reading this…but even if she/he is, I suspect that box of cards was re-gifted to ME in the first place!).

Feeling like the Queen of Generosity, I shrugged and handed my thrilled friend the box of cards. It felt great 🙂

Here’s another…titillating example of the joys of re-gifting:

After spending a decade in my house in Calgary, I had accumulated a staggering amount of eclectic treasures. Okay, some might call it junk. But it wasn’t quite dreadful enough to send to the thrift store (isn’t that terrible?!). So what my niece, Melanie, and I did for Christmas one year was wrap up all the weird and wacky items and played Secret Santa. When my entire family (about 20 people) came over for Christmas dinner, each person drew a number between 1 and 20.

When that person’s number was called, they got to chose a gift from under the tree and open it. Then we went through all the numbers again – only this time, the person could take another person’s gift and swap it with their own, usually less-desirable, gift. So the last person to choose was the winner because they had the entire selection of items to choose from.

It was a riot! The most coveted item was a giant nipple-shaped terracotta garlic holder. Not that anyone wanted to actually have that on their kitchen counter. Rather, it was the perfect gag gift to re-gift!

On a more serious note, this Christmas I was able to re-gift a lovely present for Melanie – discovered in one of the boxes from my Mom’s place. My Mom was a shopper through and through. She would buy a really nice present for someone and then promptly put it away in such a careful place that when the time came to give it away, she couldn’t find it. So when we went through her apartment in March, we came across many items with the tags still on.

One such item was a gorgeous pair of blue Denby mugs. Melanie collects these mugs, so I filled them with chocolates (just like my Mom used to!), wrapped them carefully in a big pair of fuzzy red mittens (also from Mom’s place) and sent them off to Melanie for Christmas. Not only was she thrilled, she also thoroughly appreciated yet another cool gift from Grandma.

Here’s another neat story from my Christmas this year:

In early December, I’d received in the mail a large box – with no return address. I’d opened it up to find it full of beautifully-wrapped presents and a card that read:

“I won’t be able to come your house on Christmas Eve as I seemed to have overbooked myself this year! So I have asked one of my elves to send this to you. Please put these in your stocking. Have a Merry Christmas! Love Santa”

So I did as I was told and on Christmas morning, I had a hoot opening up all the gifts! Every single one was perfect – no re-gifting required. But that doesn’t surprise me because the real Santa always gets it right the first time around 🙂

Or maybe it’s that the angels in our lives just seem to know what we need most…and when.

Maryanne Pope is the CEO of Pink Gazelle Productions and Chair of the John Petropoulos Memorial Fund. She is the author of A Widow’s Awakening and the executive producer of the documentary, Whatever Floats Your Boat…Perspectives on Motherhood. If you would like to receive her weekly blog, please sign up here.

10 thoughts on “The Tao of Re-Gifting”