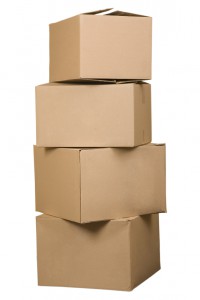 “You can’t have everything. Where would you put it?”

In boxes, Ann. Lots of boxes.

The week after my Mom passed away in March, my brothers and their families and I found ourselves in the difficult, but perhaps familiar, position of having to go through all her things. We did this so soon partly because we were all together in Calgary anyway, so we may as well get it done – and partly because my Mom’s apartment was a life lease and the contract required we sell the property back within thirty days of the end of the month she passed away. We had to act quickly.

And boy, did we ever…like ripping off a Band-Aid, it was fast but painful.

My Mom loved her stuff. Whether she used it, wore it, read it, enjoyed it or even saw it mattered far less than having it. This may have stemmed from growing up in the Depression – but getting her to part with anything she wasn’t ready to was like trying to pry a barnacle off a rock.

Interestingly, her apartment was full, yes – but it was a lovely atmosphere…warm, welcoming and relaxing versus cluttered and overwhelming.

Until, of course, the time came for all of us to go through her closets, cupboards, bureaus and storage locker. That we felt overwhelmed is an understatement. But on the upside, our grief, sorrow and shock over her sudden passing shifted – albeit temporarily – to frustration at the sheer volume of stuff we had to sort through…most of which hadn’t seen the light of day in years.

By day six (with anywhere from four to eight people working eight hour days), we’d worked our way down to the storage locker in the basement. By that point, I think we’d all had enough – especially since we had packed those exact same boxes 15 years ago when we’d moved my Mom from her house!

“This is unbelievable,” remarked one of my brothers.

“Sure is,” I said, wrapping my sixteenth coffee mug in a newspaper from 1994 and tucking it alongside my childhood Barbie clothes collection which was piled on top of yet another stack of unused Christmas cards from the sixties. Then I taped up the box, labelled it with my name and added it to the growing pile.

For the apple, as the saying goes, doesn’t fall from the tree.

Forty-five boxes, two bureaus, two desks, a chair, a table and two lamps later, I was rather proud of myself for not taking more. My family, of course, thinks I’m nuts to be shipping all this old stuff to my already-full bungalow in BC – but they’ve been very polite and understanding on the matter…and perhaps even a tad relieved that a bit more of what my Mom loved (but they don’t want or have room for) is staying in the family.

Because believe me, we gave away an awful lot – especially clothes – to the Sally Ann.

And since we did the bulk of all this sorting only a week after our Mom had passed away, emotion obviously played a significant role in determining what I would keep. And yet, I think I was still able to stick somewhat to my usual rule when it comes to de-cluttering:

“If it’s not beautiful, useful or sentimental, it goes.”

But since I don’t physically have the room to store, long term, all of which I have kept – plus my own boxes of stuff, still unopened from when I moved in 4 years ago, I suspect many items are destined to be recycled as gifts.

And then there are the family photos. Eleven boxes of them…unsorted! Never mind the ones already in my basement needing to be dealt with. These are not my photos. These are from when we were growing up – and my Mom’s childhood photos, too.

So, on my last trip back to Alberta, I loaded up my car with all the photos that need to be sorted, put into albums and distributed to family members.

Also on this trip, some of us went through all the boxes of Christmas ornaments that had been stored in my Mom’s storage locker. We’d run out of time and patience to deal with those in March, so we dealt with them in August instead. True to form, for every ornament my brothers kept, I kept ten…plus the lights. So between my own decorations and my Mom’s, I am now equipped to decorate four houses for Christmas and I have enough wattage to light up the block (think Chevy Chases’ Christmas Vacation).

There were also a few miscellaneous boxes and suitcases that hadn’t been gone through at my Mom’s in the spring, so we tackled those as well. Then, when all was said and done, we packed up the goods to be given to charity and dropped them off at the Strathmore “Recyclers” – where people take not just cans and bottles to be recycled but also clothes, household items, etc.

When we pulled up to the Recyclers with the van full of boxes, my sister-in-law directed me where to put them.

“And then get out of the way,” she said, “because people will move in fast.”

I did as I was told and she was right…people did move fast. I’d scarcely put the first box on the ground when an older lady reached in and promptly pulled out a small rocking chair.

“This will be perfect for my granddaughter’s dolls!” she cried.

“Do you think your granddaughter would like these?” I asked.

“Oh yes!” she replied, reaching for them.

“So would my grandkids!” said the woman behind her.

Uh oh. I suggested one lady take one bear and the other lady take the other.

“No!” said the first lady. “You don’t split up a pair of teddy bears like this…they go together.”

I made an executive decision and handed both bears to the first woman and then high-tailed it out of there – but not before reaching one last time into one of our boxes and plucking out a small stuffed bunny covered in cat hair and shoving it in my back pocket, hoping my family wouldn’t notice. They did.

Back home again in BC, I left the photo boxes in my living room because that made the most sense. Why lug them all down into the crawlspace when I would just have to bring them all up again? The answer, of course, is that having to look at all those boxes, draped in ugly sheets to protect them from the sun, was not conducive for inspiring me to actually start the task of sorting through the photos!

Instead, I found myself avoiding going into the living room because I couldn’t stand the sight of the boxes, nor the thought of all the work…never mind the residual resentment over the fact that had my parents, somewhere along the line, bothered to actually sort their photos themselves, this would not be my problem.

That ship, however, has sailed…and since I willingly volunteered to take on the task of sorting said photos, I will do so lovingly. But I will not spend the next six months staring at the ugly boxes in my living room, cluttering up my space and soul. So in a burst of rare August energy the other day, I leapt up from my hammock and promptly moved the boxes into the basement – and will bring them up, one at a time, to sort through in the fall. 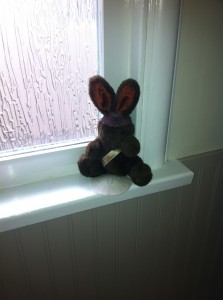 As for the bunny retrieved during my rapid exit from the Strathmore Recyclers? Well, after removing the cat hair, I asked myself the clutter criteria questions:

Is it beautiful? He’s cute, yes.

Is it sentimental? Yes. The cat hair was from my Mom’s cat, Buster. I have fond memories of Buster sleeping beside his bunny in my Mom’s living room.

Is it useful? Sure. He’s guarding the window in my bathroom and keeping a sand dollar company.

As for all the rest of the stuff from my Mom’s place? Well, if you happen to get a card in the mail from me – it will probably be rather retro. And if you’re really lucky, you might even get an old coffee cup from Vegas or Hawaii – or a “memory mug,” as my Mom liked to call them. Granted, they won’t be your memories…but who can’t find a use for a much-loved coffee mug 🙂

Maryanne Pope is the author of A Widow’s Awakening and the upcoming book, Barrier Removed; A Tough Love Guide to Achieving Your Dreams. Maryanne also writes screenplays and play scripts, including the play, Saviour. She is the CEO of Pink Gazelle Productions and the Chair of the John Petropoulos Memorial Fund.

3 thoughts on “Say WHAT? Sorting Other People’s Stuff”