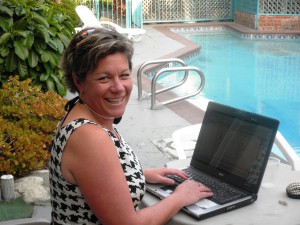 A woman, MA (that would be me), is squished in her seat, typing madly on her laptop.

A woman, NINA, 70 waits curbside for the shuttle bus.

The shuttle bus pulls up. The women get on.

MA
How far is the hotel?

Nina is furious. MA is hot, hungry and thirsty…never a good combination (those of you who have traveled with MA will know this firsthand).

NINA
This is ridiculous!

NINA
(to driver)
Where are you going?!

DRIVER
The route isn’t up to me, ma’am.
(beat)
I have to drop each passenger off in the
order the dispatcher tells me.

NINA
(softly)
Too bad the dispatcher can’t read a map.

MA and Nina look at each other and roll their eyes.

An open bag of chocolate-covered coffee beans (that Nina brought from Hawaii, where she lives) is on the night table between them.

MA reaches for another handful of coffee beans and pops them in her mouth.

NINA
I’m ready when you are…

MA
So the film begins with 77-year-old Nell
floating on her back in the ocean,
hands clasped behind her head. The year is 1968.
As the camera pans down closer to Nell…
(beat)
we can see she is smiling.

MA looks up from computer and turns to face Nina.

MA
So this part will be played by you.

MA
And do you know why older Nell is smiling?

NINA
Because she’s reflecting back on her life…
which is what her voice over will tell us?

MA
Close. She’s smiling because she knows
damn well that someday, somewhere…
someone will come along and bring her story
to life again on the big screen…but in a way
that’s relevant to a contemporary audience.

NINA
That would be you.

MA reaches for another coffee bean.

MA and Nina, now in pajamas, watch a DVD on the TV. Nina has brought the DVD with her from Hawaii, knowing MA would be interested in seeing it.

It is a recording of the 1991 theatrical production of the play, “Between Pictures,” about Nell Shipman. Written by Barry Shipman (Nell’s son, Nina’s father), Nina plays Nell.

MA
This is awesome, Nina…except that it is a little
weird that Nell’s story is so familiar to me now.

MA
So I see writing, acting and producing
film and theatre is a family tradition.

NINA
You betcha…we’re on our fourth generation.

Nina reaches over to turn out the light.

It is opening night of “The Falsetto’s” and the inaugural production of the Third Street Theatre.

On-stage, LANI SHIPMAN, 40, plays the role of Trina – the woman whose husband leaves her for a gay lover.

Lani (also the co-owner of the theatre) is similar in appearance to her great-grandmother, Nell: tall and lean with long dark hair and those large, expressive eyes so perfect for the silent movies.

MA and Nina sit in the front row.

MA (V.O.)
So I’m sitting there in the front row
and I think to myself…this is all quite unbelievable.
(beat)
Here I am in L.A., writing the screenplay
about Nell Shipman, brainstorming about the script,
line by line, with Nell’s real-life grand-daughter…
and now I’m seeing Nell’s real-life
great-grand-daughter acting on stage.
(beat)
Lani, of course, will hopefully play the role
of the younger Nell Shipman in my film, “God’s Country.”

On stage, the characters sing to each other.

MA in her seat.

MA (V.O.)
Then I turn off the voiceover…my monkey-mind…
and I sit back, relax and enjoy one of the best pieces
of theatre I’ve ever seen.

MA in one bed, Nina in the other. MA reads aloud from the script. Nina responds. MA types a note on her laptop then resumes reading.

MA (V.O.)
For the rest of the weekend, I wrote and wrote and wrote.
Although I’d already been working on the God’s Country
screenplay for six years, L.A. was the first time the
characters finally began to come to life…
(beat)
At long last, the magic began to happen.

Maryanne Pope is the author of A Widow’s Awakening. She is the CEO of Pink Gazelle Productions Inc and the Board Chair of the John Petropoulos Memorial Fund. Maryanne lives in Sidney, British Columbia.

A few more pics from LA… 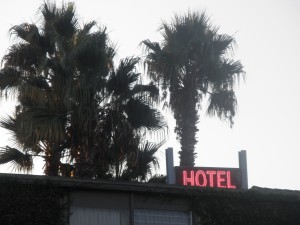