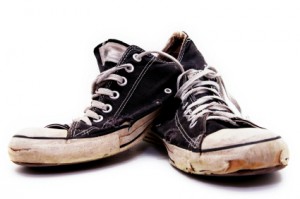 “You did not come to sit on the sidelines and watch. You came to dance.”

Several months after I moved to Vancouver Island (back in 2010), I went to my second hip hop dance class in Victoria. Things didn’t go so well. Although the classes had officially started in September, the first class I actually got around to attending was early October.

This meant I missed the first class, which I presume was the one where our teacher would’ve informed the class about the dirty shoe rule:

NO OUTDOOR FOOTWEAR ALLOWED IN THE STUDIO

Alas, no mention of this rule was made in the one class I attended – nor was it posted anywhere. Apparently, however, said rule exists – and I broke it. Big time. Since I’d been dancing for more than nine years, I should have known better.

And I do. In fact, during that one class I did attend, I admit to noticing a small gathering of sand collecting around my feet. However, instead of removing the evidence, I simply dispersed it by spreading it around a bit with my hand – and then hoped for the best.

Well, the best didn’t happen…at least, not for the barefoot African dancers who happened to dance after us. Alas, when I returned the following week, our teacher reminded us to only wear indoor footwear because, “somebody obviously wore dirty runners last week and the mess left behind was disastrous for the next class.”

Oops. I felt the blood rush to my face.

But instead of confessing, I did the next best thing. I immediately took off my shoes and ran into the bathroom to clean them off, which is where I got to thinking…I really don’t like this dance studio anyway. It’s too far of a drive from where I live in Sidney, the parking is horrendous and although I only took one class, I could tell this much: it was heavy on choreography and light on skill development.

Now, a professional dancer I am obviously not. However, I did train under Tara Wilson of Pulse Studios in Calgary for years. As far as hip hop teachers go, she was second to none. Tara taught me to feel the dance – not just remember the moves. And the difference is significant.

If I wanted to dance in music videos, then yes, choreography is rather important. But I’m forty-six years old! I want to dance for the fun of it versus struggling to remember – and replicate – a staggering amount of complicated dance sequences.

Speaking of being in my fourth decade, what I did next – after leaving the bathroom – was perhaps a tad immature for a woman my age. But boy, did it feel good! I lifted my head (and still scarlet face) high, walked back into the studio, picked up my water bottle and jacket, went into the waiting room, put my dirty shoes back on – and then ran down the three flights of stairs and out the front door.

And on the drive home, I got thinking some more. This wasn’t just about dirty shoes.

Here’s what I’ve noticed in my hip hop classes over the years: the women in their late teens and early twenties are often very good at quickly remembering and repeating complex dance sequences – but they don’t necessarily exhibit a heck of a lot of passion or authenticity.

And isn’t that a powerful metaphor for how we sometimes live our lives? For in our twenties, we do tend to put a great deal of focus on getting it right – doing what needs to be done and in the right sequence – but not necessarily taking the time to question what we are doing, why we are doing it, whether we’re even enjoying it…and whether or not it’s right for us.

Then, in our thirties, it’s almost as if someone pushes the fast forward button that makes the music go ridiculously fast – but instead of turning the speed back to normal, we just dance faster and faster in an ever increasing state of busyness…trying to get it all done, in somewhat the right order and without falling to the floor in exhaustion and tears.

It often isn’t until our forties and fifties – or older – that we finally start to slow down, relax and actually feel what we’re doing. This seems to be when we develop the confidence and courage to miss out on a few steps in the sequence and focus instead on doing the steps we love. It’s almost as if we begin to actually hear the music – the rhythms of our lives, bodies, minds, hearts and souls – and live/dance in a way that reflects who we are, versus trying to diligently duplicate what everyone else is doing.

I never did go back to that dance studio. Instead, I found a place to dance closer to home – but it’s not hip hop, instead it’s a dance called “Nia.” I love it, my teacher is fantastic and best of all…we get to dance barefoot 🙂

Maryanne Pope is the author of A Widow’s Awakening. She is the CEO of Pink Gazelle Productions Inc and the Chair of the John Petropoulos Memorial Fund.

16 thoughts on “Confessions of a Dirty Shoe Dancer”