This is the fourth blog in the Life After Loss series: 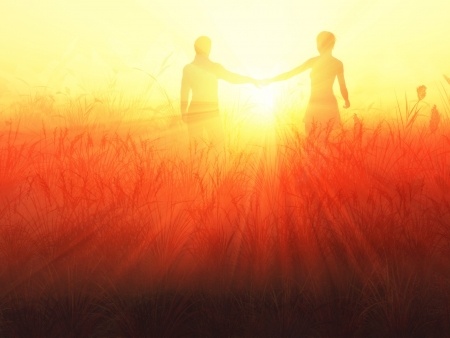 “It’s amazing, Molly…the love inside, you take it with you.”

Do you believe in some sort of life after death?

C.S. Lewis once said that he never had any doubts about people surviving death, but when his wife died, he was no longer certain. Why? Because it was so important to him that she be living.

When it comes to the belief in the possibility of some sort of life after death – i.e. the soul/spirit/essence/consciousness of a deceased person living on in some capacity after the death of their body – C.S. Lewis expressed it this way (as told by Anthony de Mello in his book, Awareness; The Perils and Opportunities of Reality):

It’s like a rope. Someone says to you, ‘Would this bear the weight of a hundred twenty pounds?’

‘Well, we’re going to let down your best friend on this rope.’

Then you say, ‘Wait a minute, let me test that rope again.’

You’re not so sure now.

In other words, before we lose someone near and dear to us, the possibility of some sort of afterlife may not be that important. In theory, we may or may not believe it.

Sure, it’s an interesting concept to think about, read about, watch movies and plays about, and discuss – but if all our loved ones are still right here with us, then what happens after they die isn’t usually too high on our radar of stuff to worry about.

But when we do LOSE a loved one, boy oh boy…now we’re concerned! I mean, where the heck did they – the essence of them – go?

Or is dead really…dead? When the body dies, is that really the end?

If you have experienced the loss of a loved one, then perhaps you may have found yourself asking these types of questions.

I certainly did after John died.

But here’s the thing: what I experienced right after his death is, in retrospect, pretty incredible in terms of evidence to support the possibility that something lives on after the death of our bodies.

As I mentioned in an earlier Life After Loss blog, I was able to spend the last day of John’s life with him in the ICU, holding his hand and comforting him as best I could as the medical team prepared his body for organ removal.

As for what happened next, here’s an excerpt from A Widow’s Awakening (I am “Adri” and John is “Sam”):

Just after midnight, an operating room becomes available. I watch as a group of nurses and technicians prepare Sam’s body for the transfer. One person temporarily detaches him from the respirator while another manually forces air into his lungs though a device that looks like a plunger. I want to scream. He’s leaving me and there’s not a goddamn thing I can do about it.

They wheel Sam out of his room and down the hall. I follow behind, right into the OR. When I turn around and see that several family members have followed us in, I scream at them instead: “Get out! Leave us alone!”

The medical personnel stare at me. But my crew of supporters high-tail it out of the operating room. I walk up to Sam, lean over and kiss him on the lips. “I love you.”

Then I take a deep breath, give him one last wave, turn around and walk out into the hallway full of family and friends.

But then an amazing thing happened. I awoke the next morning at 5:30 to see a large reddish orange light framing my entire bedroom window. When the organ removal coordinator called me a few hours later to update me on which of John’s organs were able to be donated (heart, kidneys and pancreatic islets), I asked her if she knew what time John’s heart was removed.

I could hear her flipping through her notes on the other end of the line.

I actually saw that red light two more times in the months following John’s death: once in my bedroom again – but hovering on the night stand right beside my head, which freaked me out.

But then, as the years passed, I no longer saw the light as red. Rather, I saw a white light.

In fact, it wasn’t even me who saw the white light one night above my head about three years after John’s death. I was a rustic retreat in Bragg Creek and there were several women staying in a room with bunk beds. I had slept in a top bunk bed and when I woke up the next morning, the woman in the lower bunk bed, diagonal to me, asked me how I’d slept.

“Oh,” she said. “Well, I woke up in the middle of the night and saw the reading light above your head was on, so I figured you couldn’t sleep.”

Puzzled, I looked above my head then back at the woman.

“There’s no reading light up here,” I said.

“Well,” was her reply, “there was some sort of white light above your head in the middle of the night.”

In John’s case, it makes sense that his light was red at first because I highly doubt his soul was at peace, after being taken so suddenly in the prime of life.

Whereas, as time passed, I think his soul did find peace with his sudden death, which perhaps explains why it later appeared as a white light.

“Your soul is that part of you that is immortal,” writes Gary Zukov, in his book, The Seat of the Soul. “Love is the energy of the soul…but love is not a passive state. It is an active force. It is the force of the soul. Love does more than bring peace where there is conflict…it brings Light.”

I watched the movie, Ghost, the other night. I hadn’t seen it in years. This time, however, I didn’t find it heart-breakingly sad.

Rather, I was intrigued by the way the film tackled the subject matter of life after death…and found much of what the characters experienced weirdly similar to what I have personally experienced over the years – and not just the white light at the end, when Patrick Swazye’s soul was finally at peace and able to move on.

But those are subject matters to perhaps tackle in future blogs…

What is your experience with and/or belief about life after death? Do you think the soul lives on, in some way, after the death of the body?

Here is the link to subscribe to receive the Life After Loss blogs – as well as to read the blogs posted thus far in the series.

6 thoughts on “Soul Survival – Do You Believe in Life After Death?”