PrevPreviousTravel BEFORE You Have a Child
NextMore Stunning Photos from BahamasNext

What Does the Bahamas Beach in Tomorrowland Have to Do With Our Future? 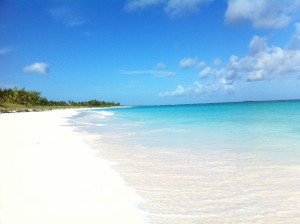 “If there is magic on this planet, it is contained in water.”

Okay, I am concerned…not just about the state of our oceans.

I saw the film, Tomorrowland, a few days ago – and honestly, I was more excited to see a glimpse of one of my favourite beaches (Tippy’s Beach on Eleuthera in The Bahamas) on the big screen than I was to see George Clooney’s mug.

For me, this is quite something 🙂

Now don’t get me wrong. I still enjoyed seeing (and hearing) George Clooney. But perhaps due to the fact that he’s now a married man, my heart simply didn’t swoon like it used to.

But boy did my heart beat faster when I caught a glimpse of Tippy’s Beach on the big screen!

Funny how we can fall in love with a place…

Now the first time we actually see the beach in the film, it’s in the distance – seen through the portal of a spaceship (at least, I think it was a spaceship but by that point, I’d kinda lost track).

Anyway, there was a whole bunch of fighting going on in the foreground and I remember thinking, “Just go through the portal, dammit! Let’s get to that beach!”

So when the two fighting characters, played by George Clooney and Hugh Laurie, finally went through the portal and ended up on the beach, I was in Heaven…for approximately 17 seconds, during which there was another fight scene (with much sand flying).

And then before I knew it, the beach scene was over. But it was a neat experience, seeing a much-loved, familiar place on the big screen.

As for the film itself? Well, Tomorrowland was very entertaining and highly creative, even though I was kinda confused in places (but that might just be me).

And I certainly resonated with the film’s main message of how the future belongs to the dreamers. As a dreamer myself, this is good news.

What I didn’t resonate with, however – much to my surprise – was the film’s other main message about how important it is that people have a positive attitude towards the multiple environmental and societal issues we collectively face.

From a climate change perspective, we are in serious trouble and if we want the land – and sea – of tomorrow to be anything less than a catastrophic nightmare, the window of time in which we have left to act is closing fast.

“In Naomi Klein’s book, This Changes Everything, Klein quotes eminent climatologists who worry that even the best efforts to prevent global warming from rising to an intolerable level may come too late if not launched very soon. They differ on when we’ll reach the tipping point but agree that even the year 2020 will not be soon enough. According to Klein, the International Energy Agency warns that if we do not get our emissions under control by a rather terrifying 2017, our fossil fuel economy will lock-in extremely dangerous warming.”

So perhaps what is needed most right now is some serious negativity towards the reality of our collective future, in order for us to get motivated enough to actually change course?

For even the positive dreamers won’t be able to change the planet’s destiny, once the point of no return has been crossed…which is in 5 years, if we’re lucky.

And this link will take you to a few more stunning snapshots of Eleuthera…enjoy!

PrevPreviousTravel BEFORE You Have a Child
NextMore Stunning Photos from BahamasNext