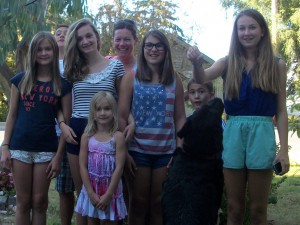 “Laughter is like the human body wagging its tail.”

– Anne Wilson Schaef, Mediations for Women Who Do Too Much

Five days, seven kids, one bathroom…and one clearly crazy Auntie (that would be me). But I survived Camp Pope 2014! And I am pleased and proud to report that all children are now safely back with their respective parents in their respective homes that I can pretty much guarantee are far cleaner and tidier (but noisier) than mine at the moment.

My house isn’t just messy; it looks like a bomb went off. Two days later and I’m just starting to make a dent in the laundry and dirty dishes. Despite my best efforts, however, the water in my hot tub is still a suspicious shade of grey 🙁

But that water is replaceable. Time is not. Experiences are not. Memories are not.

As such, did we have fun? Yes!

Did we laugh lots? Yes!

Did we see new and interesting things (versus swimming in the local pool every day like we did last summer)? Yes!

Did we get lost? Yes!

Did we eat well? Yes!

Were there moments when I’d had ENOUGH? Yes!

Did we all get along? No!

But Hollywood hit the nail on the head on this one for me. One evening, we all walked down to the local Star Cinema theatre to watch a movie. The younger kids watched Planes, Fire & Rescue while the older ones and I watched Dawn of the Planet of the Apes. Caesar – the calm, cool and collected leader of the apes (unlike myself) – had several sage words of wisdom to offer:

Family fight but stick together. Check.

The movie ended with an extreme close-up of Caesar’s eyes. 11 year-old Zach, sitting beside me, turned and said, “Gee…he looks an awful lot like a human.”

Here are some pics from the week:

So would I host Camp Pope again? Well, let’s put it this way: Camp Pope is rather like traveling in India. My friend Jackie and I traveled through India eleven years ago and it was…an adventure. When I got back home to Canada again, I had zero interest in ever returning for a second round. But time has a funny way of softening the harsh reality of an experience and before you know it, the good memories far outweigh the bad.

I can already feel that happening with Camp Pope…the whining, complaining, bickering, kicking, punching, slapping and biting memories are already starting to fade (as is the cut on my foot from when I stepped on a piece of sea glass someone dropped in my back yard and failed to tell me).

And the fun memories of all the laughter and goofy moments (like when 6 year-old Ella gave us – and all the other people on the ferry – an impromptu show of her pole-dancing capabilities after which 7 year-old Nicholas announced loudly: “MY CROTCH IS FROZEN”) are finding their way to the surface…rather like the pod of whales we saw breaching off the coast of East Sooke Park. That memory alone – for all of us – made Camp Pope well worth it.

On the last day, we gave each other honorary camp awards:

Most Stinky: me (who has time to shower with all that swimming, cooking & cleaning?)

Most Likely to Get Lost: Paige

Most Likely to Become a Pickpocketing Pole-Dancer (just kidding!): Ella

Most Well Behaved: Jade (the dog)

And that, dear readers, is why I tend to prefer pets to children 🙂

Maryanne Pope is the author of A Widow’s Awakening and the upcoming book, Barrier Removed; A Tough Love Guide to Achieving Your Dreams. Maryanne also writes screenplays and play scripts, including the play, Saviour. She is the CEO of Pink Gazelle Productions and the Chair of the John Petropoulos Memorial Fund.