It’s Not About the Sext 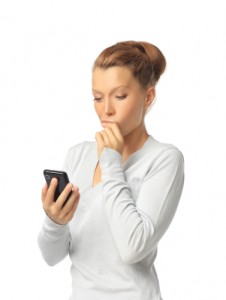 It’s Not About the Sext

I had a delightful romance this past summer…short but sweet. Unfortunately, it ended rather abruptly over a sexting incident, of all things.

Now prior to this, to me the concept of “sexting” was just that: a concept. It was something I’d heard of but had never personally participated in.

My summer fling was with a fellah in his late fifties. We met in June, went on a couple dates, had a few wild nights together and then off he sailed into the sunset. Literally…the guy had a 35-foot sailboat, which I never did see 🙁

Anyway, after his mid-summer departure, I didn’t hear much from him for a few weeks – apparently, the cell phone reception wasn’t great where he was. I would send him a text every once in awhile, just to check in…but there would always be a good twenty-four hour delay before he responded.

In other words, not only was he not taking the initiative to contact me, when he did respond to my texts, he took his sweet time – which I chalked up to the poor reception.

Then he suggested that, since we weren’t going to see each other for a little while, perhaps we could ‘spice up’ our texts a little?

Or, I thought to myself, how about you pick up the bloody phone and call to see how I’m doing?

Nope. The next thing I know there’s a sext on my iPhone worthy of a Penthouse Forum letter. Correction: it would’ve been too crude for Penthouse to publish.

But his cell phone reception had miraculously improved!

Sure enough, the next day I get another text from him, apologizing. So I let him have it – via text message – all the reasons why I found his behaviour inappropriate. It wasn’t just about the sext, I said. That was the icing on the cake. What bothered me most was that he obviously didn’t know me very well – and didn’t seem overly interested in doing so.

But what happened next was the clincher. He acknowledged my concerns, via text, and agreed we should talk about them – however tonight wasn’t a good time because he was a bit busy…relaxing in a hot tub.

I blinked my eyes and re-read his text. Surely I hadn’t read correctly the first time?

I threw back my head and laughed at his apparent stupidity. But at least he was honest in communicating his priorities – and I thanked my lucky stars that I learned, sooner rather than later, that he was not the guy for me. And when I stopped laughing long enough to take a good look in the mirror at my own behaviour, I realized that maybe, just maybe, I got exactly what I had been looking for.

On further thought, re-reading Esther Kane’s outstanding book, Dump that Chump, might also be in order!

Maryanne Pope is the author of A Widow’s Awakening and the upcoming book, Barrier Removed; A Tough Love Guide to Achieving Your Dreams. Maryanne is the CEO and Founder of Pink Gazelle Productions Inc. and the Board Chair of the John Petropoulos Memorial Fund. Maryanne lives on Vancouver Island, British Columbia.

12 thoughts on “It’s Not About the Sext”