And then the day came…

And Then The Day Came… 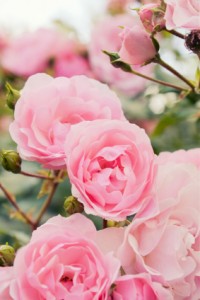 This quote by Anais Nin is one of my all-time favourites and I had a pretty little framed version of it in my Calgary living room for years.

I hadn’t always lived in Calgary. My husband John and I had lived in British Columbia for four years while he was going to University. We’d moved back to Calgary in 1996 when he got hired by the Calgary Police Service.

I remember the day John got the call telling him he’d been hired. He literally fell on the floor and rolled around on his back, kicking his legs in the air and hooting and hollering. His dream had come true.

As for me, as happy as I was for him, I had significant reservations about moving back to our hometown…partly because John and I were both very happy in BC – so why mess with that? – and partly because of the sheer magnitude of the support system we both had in Calgary.

How could I continue to grow as a person surrounded by so much familiarity?

This attitude became a self-fulfilling prophecy and, in many ways, I spent the next four years curling up tighter and tighter in my safe little bud of dreaming dreams but not significantly working towards achieving them.

Then, when John died on the job in 2000, that same system of support that I perceived to be holding me back was immediately transformed into the very life support system that sustained me through my darkest days, months and years.

Shortly after John’s death, a close friend gave me a card with this quote on it:

“Bloom where you are planted”

And bloom I did for the next nine years. But then the day came in the fall of 2009 when I realized I had outgrown my pot – but not because it wasn’t big enough. In fact, at 2800 square feet, my Calgary pot/home was too big for me!

One of my favourite writers, Sarah Ban Breathnach, author of Simple Abundance; A Daybook of Comfort and Joy wrote, “Did you know that plants need to be repotted at least every two years? Even if the roots don’t need more room to grow, the old soil should be replaced because all the nutrients have been consumed. We, too, need to consider repotting for growth.”

I knew what I needed: a smaller pot with new soil – and plenty of water nearby.

When John and I had left Abbotsford back in 1996, our plan had been for us to return to BC – probably Victoria – when he retired in twenty five years. For my dream was to be a writer by the sea. John’s death got me going on the writing part. So then, nearly ten years later, why was I still living on the prairies?

“There once was a baby circus elephant who couldn’t break free from her leg chain, though she tried and tried. Eventually she gave up. Years later, she still had that little chain around her leg. Although she was strong enough to break free, she had long since accepted that she could not. Emotional chains, after all, are the hardest to break.”

– From Open Your Mind, Open Your Life by Taro Gold

Ouch. I sold my Calgary home, packed up my belongings and moved to Vancouver Island in the spring of 2010. Two weeks later, I bought a cute little home in Sidney…five blocks from the sea.

And how did I know I was on the right track?

Well, for starters, this is what I found on the side of the garden shed in my new backyard: 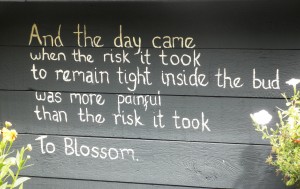 I dare say I found my new pot 

Maryanne Pope is the author of A Widow’s Awakening. Maryanne also writes play scripts, screenplays and short stories. She is the founder and CEO of Pink Gazelle Productions Inc and the Board Chair of the John Petropoulos Memorial Fund. She lives on Vancouver Island, British Columbia. If you would like to receive Maryanne’s weekly blog, please sign up here.