This is the second blog in the Face the Future Spring 2017 blog series:

“For decades now, we’ve looked the other way as global temperatures and sea levels have risen, as the ice caps have shrunk, and as greenhouse gas emissions have grown unchecked. Despite mounting evidence to the contrary, we’ve chosen to believe that we can go on living the way we’ve always done. We can’t. Our past choices are catching up with us, quickly.”

– Jeff Rubin, The Carbon Bubble; What Happens to Us When it Bursts

Happy Friday & thanks for being part of the Face the Future blog series!

Tomorrow – April 1st – is April Fool’s Day. It is also Fossil Fools Day – a national day of student action across Canada to raise awareness about the need for society to move away from fossil fuels as our primary energy source and towards a more sustainable future.

“Emissions from fossil-fuel consumption have remained at historically high levels since 2011 and are the primary reason atmospheric CO2 levels are increasing at a dramatic rate.”

We are rapidly running out of time to make the changes that need to be made – in order to ensure a sustainable future.

Last weekend, I was browsing in my favourite bookstore (Munro’s in Victoria), doing my darndest to avoid worrying about the environment – despite the terrifying dispatches from Washington, DC about Trump & Company’s insistent denial of climate change AND the subsequent policy changes this denial is leading to.

But wouldn’t you know it, what book jumps out at me from the damn bookstore shelf? Jeff Rubin’s 2015 book, The Carbon Bubble; What Happens to Us When it Bursts. It was in the sale section. 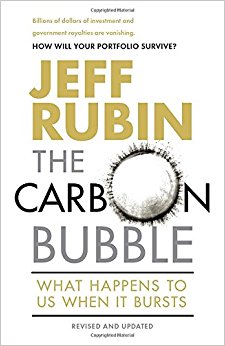 Of course it was on sale! Who wants to read about reality? Especially when reality really sucks.

Alas, I am a glutton for punishment so I forked over my $7.99 and trundled home with my depressing treasure.

I haven’t gotten very far in the book yet but what I read in the first two chapters certainly wasn’t conducive to a good night’s sleep – especially since I also went on-line to research for myself the eerily rapidly increasing amount of carbon we are pumping into the atmosphere through the burning of fossil fuels.

Did you know we actually have very few years left before we overload our atmosphere with carbon – beyond the point of no return?

“The longer we wait to reduce our emissions, the shorter the time we have left to power our world by burning carbon. And, unfortunately, the trend in annual emissions is moving in the wrong direction.”

Here are a few sobering facts from Rubin’s book:

1.) Anything greater than a 2-degrees-Celsius rise in average global temperature would overwhelm our capacity to adjust, putting the human population – not to mention countless other species of animal and plant life – at risk.

2.) Atmospheric carbon was stable at around 280 part per million (ppm) from the time of the last ice age (roughly 10,000 years ago) to the dawn of the Industrial Revolution (1760).

3.) According to the IPCC (Intergovernmental Panel on Climate Change), the point of no return is 450 parts per million. Anything beyond that and the 2-degrees-Celsius threshold will be breached.

So how much time DO we have left until we reach the point of no return of 450 ppm?

But first a few more facts from my on-line research (data from the National Oceanic & Atmospheric Administration):

So there I sat, studying the damn chart right before going to bed. A mathematician I am not – but  even my little pea brain could see that the atmospheric carbon number was increasing every year by 2 ppm. Until, that is, we hit 2015.

“The two-year, 6-ppm surge in the greenhouse gas between 2015 and 2017 is unprecedented in the observatory’s 59-year record,” said Pieter Tans, lead scientist of NOAA’s Global Greenhouse Gas Reference Network.

So I pulled out my handy-dandy calculator and punched in a few numbers. Get this: if our atmospheric carbon continues to increase by 2 ppm per year, then we have 22 years left (we are now at 406 ppm) before we hit the point of no return (450 ppm).

And then what happens? What would our world look like if we go over the 2-degrees-Celsius rise in average global temperature?

The answer, in a nutshell, is: Glaciers melt, ocean levels rise and crop yields falter. Please click here to read an article for more deets.

“The rate of carbon dioxide growth over the last decade is 100 to 200 times faster than what the Earth experienced during the transition from the last Ice Age. This is a real shock to the atmosphere.”

This should also be a real shock to us – the inhabitants that rely on said atmosphere…to survive.

Or perhaps you might be asking, “What on earth can I do about this looming catastrophe?”

But let’s say you do happen to care that we are hurtling ever faster towards environmental disaster, there are, in fact, two tiny things you CAN do right now:

1.) Join me in pulling our collective heads out of the sand on this issue 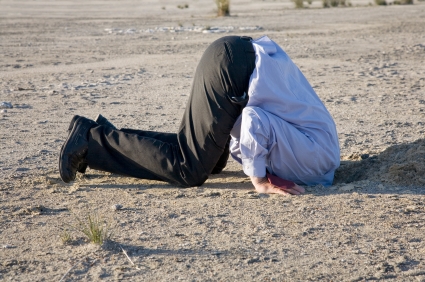 2. Check out this website that tracks our atmospheric carbon: Earth’s CO2

Or if you want to go directly to the National Oceanic & Atmospheric Administration website that gathers the data, here is the link:

But you might want to check that website out sooner rather than later. With the Environmental Protection Agency now its on way to going the way of the Dodo bird, Oceanic & Atmospheric data could very well be next on Trump & Company’s hit list.

Annoying scientific facts have no place in a post-truth world.